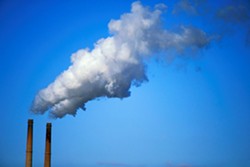 Missouri's carbon-dioxide output from coal-fired power plants increased last year by nearly nine percent, to more than 83 million tons. The rise over 2009 output surpassed the nationwide increase last year of 5.56 percent and placed the Show-Me State as the tenth worst state for carbon dioxide output from power plants, according to a new report from the Environmental Integrity Project.

The study cited higher-than-normal temperatures (2010 tied 2005 as the warmest year on record ever) as well as the economy's slow -- but steady -- rebound as contributing to the rise in coal-based energy use last year. The report encourages the use of greener energy sources -- such as wind and solar -- even as though efforts are under attack in Missouri.

As Reuters reported last week, Republican legislators in Jefferson City have passed bills that will overturn many of the provisions of Proposition C, a ballot initiative approved by 66 percent of voters in 2008, that calls on investor-owned utilities (such as Ameren) to provide at least fifteen percent of their electricity from renewable sources by 2021, of which two percent must be solar energy. Instead of actually investing in and using clean energy in Missouri, the pending legislation would allow utility companies to purchase renewable energy credits from alternative-energy sources worldwide.