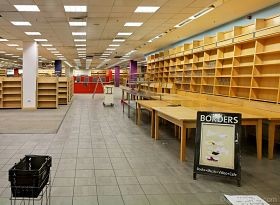 It was only two days ago that the Borders Group filed for Chapter 11 bankruptcy protection and published a list of the 200 stores doomed to extinction, but the chain means business. This weekend the liquidation sales are on.

The St. Louis Business Journal reports that Borders has about $350 million of inventory to get rid of before the stores can shut down for good, so starting tomorrow, Saturday, February 19, it's offering 20 to 40 percent discounts on books, movies, magazines, CDs, games and other assorted tchotchkes. But that's only in the stores that are actually closing, which, in St. Louis, means the locations at Chesterfield Mall, Mid-Rivers Mall in St. Peters and at 15355-A Manchester Road in Ballwin.

Bear in mind, if you do decide to take advantage of the mega-chain's misfortune: Nobody's going to send you a free CD of local music for buying something like the bloggers of I Went To A Show promise to do if you shop at an indie bookstore this weekend. (Though Daily RFT originally reported that I Went To A Show's offer was good only yesterday, the bloggers have decided to extend it through this Sunday, February 20.)

FYI: Here's a list of independent bookstores that could serve as possible alternatives to the soon-to-be-shuttered Borders. But more likely, given the long driving distances, folks will be shopping at Barnes & Noble or Amazon instead.