University of Missouri, Other MO Colleges, Hit By Veterans' Lawsuit 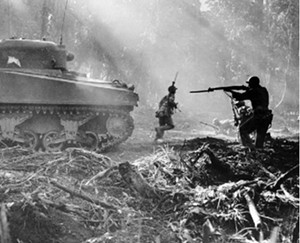 A group of military veterans is suing trustees at the University of Missouri, Southeast Missouri State University and the Moberly Area Community College, alleging that the universities systematically overcharged them -- thereby violating a state program designed to help combat veterans attain a college education.

At issue is the Missouri Returning Heroes Act, which was passed by the state legislature in 2008. It decreed that all combat veterans who were Missouri residents at the time they entered the military, received honorable discharges and maintained 2.5 grade-point averages should be charged no more than $50 per credit hour.

Well, not really. Nothing, in fact, is simple about higher education -- a big business where federal money is a major part of any equation.

The issue here is that the vets believe their tuition should be discounted first, and then their federal grants should be applied to the rest of their bill, which includes room and board. The universities, however, have apparently been applying the federal grants to the total bill -- then, if the student still owes anything for tuition, discounting that to $50 a credit hour.

Since tuition is only 40 percent of the cost
of attending college, the net effect is that veterans' federal grants canceled out any savings from the Heroes Act -- and then they were left with a giant bill for room and board like any normal college-attending Schmoe, with no grant money left to cover it.

We have a call out to the University of Missouri's Office of Strategic Communications. We'll update this post if we hear back.

But it's worth noting that even the law quoted in the suit suggests that the universities may be following the state's intent. The law specifically states that the reduced tuition "shall be provided after all other federal and state aid ... has been applied."

Still, it's easy to see how such a set up (while allowing the universities to collect their share from the feds) has hurt the veterans.

"Diverting all 'grant aid' funds to pay only tuition damages Missouri combat veterans because it strips them of aid to pay for room and board, living expenses, books and supplies and transportation," write attorneys John G. Simon, John E. Campbell and Stephanie To on behalf of the veterans. "By applying the gift aid directly to tuition, Defendants routinely collect tuition at a rate that exceeds the rate allowed under the Heroes' Act.

"This maximizes revenue to the Defendants and increases cost to combat veterans."

The group is hoping the suit will be certified as a class action, which
would allow all veterans using the program since 2008 to be eligible for damages. The suit estimates that could be as many as 8,000 people.

The lawsuit was first reported by the Courthouse New Service. You can read the whole complaint here.

UPDATE AT 6 p.m.: The University of Missouri called us back to say they've haven't been served with the complaint yet, but, as they have a policy on not commenting on pending litigation, we shouldn't count on getting a statement any time soon.