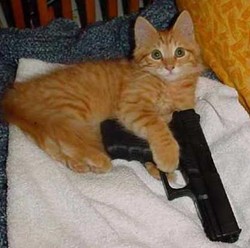 The cat is out of the bag.

The "Good Samaritan" who made news earlier today after he was shot in the hand -- allegedly by a man he tried to help -- is a big fat liar, according to the Jefferson County Sheriff Department.

Earlier this afternoon, Sheriff Oliver "Glenn" Boyer held a news conference to report that the shooting victim has now been charged with filing a false police report.

Under questioning this morning, the man reportedly confessed to sheriff deputies that he'd fabricated the story last night about being shot by an injured man that he tried to assist near Highway 30 and NN, about 35 miles southwest of St. Louis.

The truth is that he accidentally shot himself while trying to kill a feral cat.

The sheriff's department had used dogs and a helicopter to try to apprehend the bogus gunman prior to the man's confession.