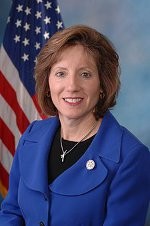 Gather your children and take up your lanterns and pitchforks. The day of reckoning is upon us.

President Obama has a pro-homosexual agenda, and he's bringing it right to the doorsteps of us Missourians. At least, that's according to Vicky Hartzler, freshman Congresswoman from the state's fourth district.

Speaking on a television program aired by the American Family Association, Hartzler, reflecting on her fellow first-year lawmakers in the House, opined: "The reality is, the good people of this country who love it, who love God, who love each other, who are concerned about the pro-abortion, pro-homosexual agenda of the current administration -- they were the ones that got down on their knees and started prayin' for this country after the '08 election."

It's not clear whether Hartzler, in referencing homosexuality, was denoting the recent repeal of Don't Ask Don't Tell, which was endorsed by the secretary of defense and chairman of the Joint Chiefs of Staff; or support of gay marriage, which the president has never proposed.

Maybe the congresswoman, who recently penned the book "Running God's Way," was just thrown off after being introduced by the show's co-hosts -- who then promptly ignored her as they bantered about for another minute before letting her speak.