So there was this game held over the weekend, called the Super Bowl, and the St. Louis Rams were, sadly, not a part of it. Shocking, I know, but them's the breaks. I would argue, however, that aside from the two teams who actually did manage to take part in said Super Bowl, the Rams may have had a better weekend than any other team in football.
The Rams saw two former players elected to the Hall of Fame, including Marshall Faulk, who became just the second St. Louis Ram to ever enter the hall, and saw their new franchise cornerstone quarterback, Sam Bradford, win a little hardware of his own as he was voted the NFL's Offensive Rookie of the Year.
Not a bad weekend, all in all, for a franchise which has had precious few opportunities for cheer in recent years.
First, a word about the election of Les Richter to the Hall of Fame. To be honest, I only have a vague idea of who Les Richter is. His football career was well before my time, and while I know he was a vice-president of NASCAR for awhile, motorsports are most decidedly not my thing, so he doesn't exactly jump out at me from that point of view, either. What I do know is he was a linebacker, apparently a damned fine one at that, and he was once traded for eleven players. If nothing else, that alone is enough to ensure he'll probably always have a place in the record books. 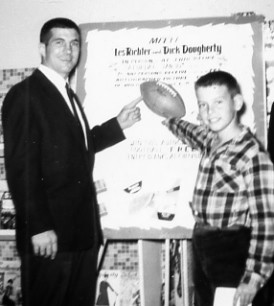 ​Marshall Faulk, though, is another matter entirely, at least for me. Marshall Faulk I am fully acquainted with, and more than a little in awe of.
The Greatest Show on Turf years were good ones for Rams fans, and for the Rams themselves, and Faulk was more responsible for those good years than any other single player. Kurt Warner gets the credit for stepping in out of nowhere and turning into a Hall of Famer overnight; Isaac Bruce gets credit for being the original St. Louis Ram (and the last Los Angeles Ram); Torry Holt gets credit for big plays and hocking Imo's pizza; Orlando Pace gets credit for being the Immovable Object who protected Warner as Mike Martz called seven step drops all day long. But Faulk was the true transformational piece, the catalyst that turned a talented collection of receivers and a quarterback from football Nowheresville into an unstoppable juggernaut.
Faulk was one of the most complete players in the history of the NFL, and it was that multidimensionality which made him the centerpiece of the Greatest Show offense. He could beat you on the ground, he could beat you in the air, and he was one of the best blocking running backs I've ever seen. He was smart, too, smart in that way you can see but never quite describe or understand. He saw the game differently, and knew what to do with what he saw.
With any other running back, the Rams would have had a great offense. They had too much talent on the offensive side of the ball not to. But with any other running back, by which I mean an ordinary running back, the Rams wouldn't have aspired to such historic heights. Faulk's presence on the field, his ability to impact the game in such a wide variety of ways, changed the game entirely. He was the engine that drove the Greatest Show on Turf.
Given time and the weapons to use, Sam Bradford just might aspire to those same sort of accolades. He added another piece of hardware to his already-impressive trophy case when he won the Offensive Rookie of the Year award, capturing 44 of 50 first-place votes.
Honestly, the only surprise in Bradford winning the award is how close to unanimous it was. He was clearly the top choice, of course, but given the Rams' failure to make the playoffs and the rather ignominious way in which the season ended I thought there might have been more dissent. Then again, Bradford did set rookie records for pass attempts and completions, as well as posting the second-highest yardage total for a rookie QB all time. (Peyton Manning is still number one in yards and touchdowns.)
It's tough to really quantify the effect Sam had on the Rams this season. On the one hand, they did improve by six wins from 2009, and when the biggest change from one year to the next is the guy taking the snaps, then a big chunk of the credit (or blame, for that matter), has to go to him.
On the other hand, you could argue the Rams' improvement in 2010 was as much about the defense as it was the offense, and you would be absolutely right. The offense was a full touchdown per game better than in 2009, but so was the defense. And no matter how you might try to spin the story, Sam Bradford doesn't have a whole lot to do with the defense.
Then again, sometimes what happens on the field is only part of the puzzle. Bradford certainly had an effect on the field, where he strained against the baby steps Pat Shurmur and Steve Spagnuolo forced him to take (frustrating, yes, but also wise in the long run, I think), and dealt all season with a severe lack of talent to throw the ball to. But even more than that, there was a feeling in the air this year that something big was happening. You could feel it even in preseason, when the games don't matter, that a new chapter was being written for this team. So maybe what Sam brought wasn't just his play on the field; maybe what he brought was the sense things were going to be different now, that this didn't have to be the same old Rams anymore.
Regardless of all that, the Rams had themselves quite a weekend. They celebrated the distant past with a linebacker from the old days, they celebrated the recent past with the man who gave the Greatest Show its greatestness, and they celebrated the present (and more importantly, the future), with the man I think we all believe will lead them to the next bunch of glory days.
Congratulations, one and all.