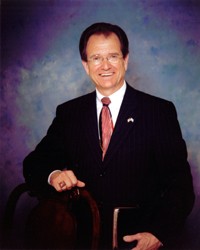 The former pastor at at Parker Road Baptist Church in Florissant was sentenced to eight month in prison Friday.

In May, federal prosecutors charged Danny O'Guin, 63, of defrauding members of his church out of thousands of dollars. According to the indictment, church members felt compelled to loan their pastor money when requested. O'Guin, however, had trouble re-paying the loans.

Prosecutors allege that he'd borrow from one member -- say a person named "Peter" -- to repay a debt to another -- perhaps someone named "Paul." O'Guin was also accused of using "lulling" techniques to delay payment, such as sending checks with mistakes in them, for example a check for $1,125 to cover a debt of $10,125.

In November he pleaded guilty to one count of wire fraud. In addition to his prison sentence, O'Guin is to pay restitution of more than $100,000.

Dirty Rotten Scoundrels Gettin' All Religious Up in Here