UPDATE: Help Save Subterranean Books From the Evil Recession 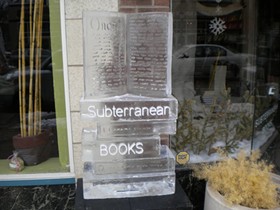 Subterranean Books, the awesome independent bookstore that has graced the Delmar Loop for the past eleven years (and winning Riverfront Times' Best of St. Louis honors several times along the way) may be forced to close up shop on September 1.

Subterranean requested a rent reduction from its landlord and was turned down. Owner Kelly von Plonski has also considered relocating the store, but found that rents in other parts of the city, such as South Grand, weren't low enough to justify the cost of moving.

In any case, von Plonski writes on the store's Facebook page, there's no point in paying less rent if the customers still won't come. To that end, she's set up a survey to see what, exactly, her customers are looking for.

The store shut down its used book section in 2008 and contracted from two storefronts on Delmar Boulevard to one.

Von Plonski has lost her voice due to a cold, but hopes to be able to tell Daily RFT more tomorrow.

February 4: Update with comments from von Plonski after the jump...

"We never had much cushion," says von Plonski. "We've never been high-grossing and our payroll is tiny, but we've always had just enough. Last year from January through March, our sales were up, but then they went down again April through November. In December they were back up again and I was thinking, 'Maybe we've turned a corner.' And then in January, we were down 25 percent."

Von Plonski has set an arbitrary deadline of the end of June for sales to turn around. If they don't, she's leaving the rest of the summer to liquidate her stock and give the landlord time to rent the space to someone else.

(Unlike many independent bookstores across the country, including Left Bank Books' downtown location, Subterranean's rent isn't subsidized. Von Plonski pays about $21 per square foot. She had asked her landlord for a 30 percent reduction, but the landlord declined.)

"We want to earn people's business back," she says, "and earn new business. We're not looking for anyone to give us a handout. That's not how business works. We want people to choose to spend their money with us because we're good."

Von Plonski isn't sure what happened to drive Subterranean's sales down. Though she and her staff won't tabulate the survey data till the end of next week, they've been scanning the early responses and have found most of them overwhelmingly positive. A lot of people, though, didn't seem to realize that Subterranean has a website they can use to order e-books and regular books that aren't in stock ("It's not one click like Amazon, it's maybe five clicks," von Plonski admits, "but it's there"), and that the store offers a weekly storytime. Which tells von Plonski she needs to promote these things more aggressively.

Readings, she concedes, would give her extra business, like the 600 people who turned out for last September's visit from Jonathan Franzen. (That reading was sponsored by Left Bank Books.) But readings are difficult to get: not only would Subterranean be competing locally with Left Bank and Pudd'nhead Books, it would also be fighting with stores nationwide who want authors to come to their towns.

Rearranging the store to make the aisles wider, which many shoppers have suggested, is not an option. "The shelves are screwed and glued into the floor," von Plonski explains. "It was like that when we took over the space."

Mostly, though, she blames Amazon, which lures customers with home delivery (which Subterranean also offers), deep discounts (from bullying small publishers) and no sales tax (a discrepancy that, in Subterranean's case, cannot be helped).

"If Amazon would subsidize our rent," she jokes, "they could use us as a showplace. People come in and look at our books and then order them from Amazon. They do this all the time. And it doesn't feed us. People get complacent and forget us. And we can't handle people forgetting us."