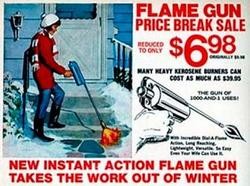 Francis Slay is back in town. The St. Louis mayor arrived home Wednesday via Amtrak after his flight from California was canceled Monday due to Midwest snow storms.

One of the mayor's first stops upon his return was to visit the city's emergency command center at Soldiers' Memorial. That's where his staff had been holed up for "Snowmaggedon" as they coordinated with street and disaster crews to clear the ice and snow.

Still, much of the region continues to look like the innards of an old freezer in need of a serious defrosting. Two to three inches of ice coats damn near everything, and based on the weather forecast, the ice is likely to be here for a week or longer.

What to do? May we suggest that Mayor Slay take a page out of the playbook of Boston's late, great mayor, James Curley.

The year was 1948 and Boston was sacked by record snowfall. Desperate for a solution, Curley penned a letter to engineers at M.I.T. asking that they consider inventing flamethrowers to melt the snow.

Sounds somewhat far-fetched, eh? Actually, it wasn't. Today in Minneapolis they use something called the Snow Dragon, to rid the city of excess snow. It's a machine that can melt 30 tons of the white stuff in an hour.

So how 'bout it engineers at Washington University and Saint Louis University? You got any ideas you want to share?

Apropos of Nothing Weather