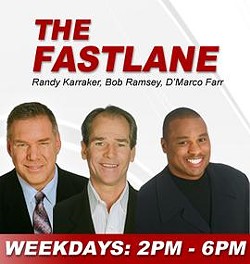 First thought: I thought the goal of TMZ was to embarrass real celebrities?

Second thought: D'Marco sounds like such a nice boy on the radio.

If you haven't heard yet, the cameras of TMZ caught former St. Louis Ram D'Marco Farr spouting off a string of obscenities at a Dallas valet this week.

Farr is in Texas covering the Super Bowl for St. Louis radio station 101.1 ESPN. Apparently ex-Super Bowl champ refused to pay a valet at a restaurant and then yelled at him when the parking attendant tried to get him to fork over some cash.

Farr then said he just needed to "take a piss" and no longer wanted to argue 'cause it was "f**cking cold" outside.

H/T: Punching Kitty, which reports that Farr will address the incident today on 101 ESPN's Fastlane from 2 p.m. to 6 p.m.