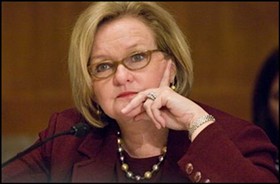 Check out The New York Times this morning on why the Dems chose Charlotte over other contenders for their national convention:


St. Louis was widely seen as the next choice to Charlotte...[but] there were broader concerns raised about Missouri....

One of the country's most competitive Senate races is also taking place in Missouri, with Senator Claire McCaskill, a Democrat, singled out by Republicans as she seeks a second term.

Ms. McCaskill, one of the president's closest friends in the Senate, publicly supported having St. Louis host the convention, but she raised several concerns to the White House, according to party officials familiar with the selection process. She questioned whether her re-election would be complicated if the convention were held in St. Louis.

In a statement on Tuesday, Ms. McCaskill said she was ''bitterly disappointed'' that St. Louis had been passed over. She added, ''I'm incredibly proud of the bid put forth by St. Louis and how bipartisan the support was."

Daily RFT predicts that the Missouri GOP, naturally, will try to use this against her, by arguing that McCaskill put her own needs ahead of the City of St. Louis (which would've benefited from hosting the convention).

But the whole reason McCaskill didn't want the convention (according to the NYT's article) was that Republicans would've somehow used it against her come election time. So it looks like they would've had her either way.