Goldurnit, St. Louisans Swear More Than Almost Anybody Else in Missouri

Cartographer Daniel Huffman just made a new map of the continental U.S. This is a very special map. It tracks the amount people in various parts of this glorious country swear. He did it like a heat map. Take a look.

You may notice that the area around St. Louis looks a little...pale. In this case, lighter colors mean more profanity. 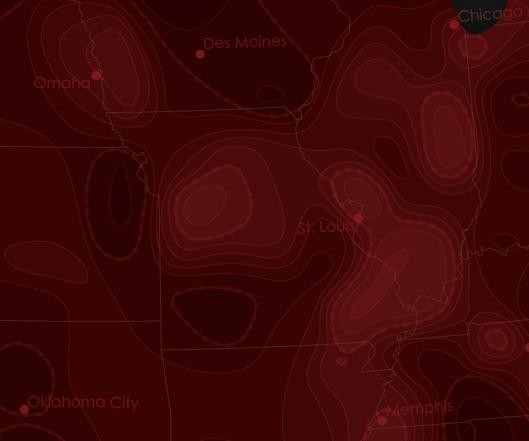 Huffman admits his method is not the most scientific: He used Twitter.

First he compiled a list of Tweets from various populations centers, trying to account for different population densities. In his words:

I am no expert in spatial analysis, and I feel I was somewhat arbitrary in my methods. Basically, I generated a raster surface in which each pixel gave the average number of profanities for the nearest 500 tweets that could be located.

Next, Huffman fed his Tweets into an Excel spreadsheet and performed a search for six dirty words: fuck, shit, bitch, hell, damn and ass. (He tried a few others of Carlin's magnificent seven, but discovered they didn't turn up that much on the Twitter.)

Then he made the colors all pretty.

St. Louis is a hue that indicates somewhere between 14 and 15 cuss words per 100 on Twitter. Gentle reader, please bear in mind that Huffman did his survey last March and April, a period when life is relatively pleasant here, at least as far as weather is concerned. (Today weather is never far from our thoughts.) It would be interesting to contemplate how we would do in more, um, stressful times.

It's also interesting to wonder what folks in that dark patch of southwest Missouri say when they get pissed off. Or maybe they'd say cheesed off.