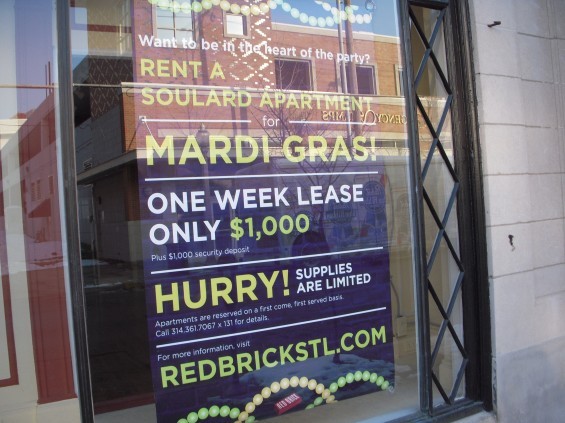 Are you a big partier?

Do you regularly do kegstands with your bros -- even though you're in your 30s?

Do you plan on getting so shitfaced for Mardi Gras, you shouldn't be trusted to get home in a cab, much less one of those bar-sponsored shuttles?

If the answer to all these questions is yes, yes, and YES!, then a St. Louis property management company has an apartment for you.


OK, so we may be exaggerating a tiny bit on the target market for these places. But Red Brick Management is offering short-term leases on Soulard apartments for the week of Mardi Gras. Beads! Boobs! Beer! For just $1,000, you can be right where the action is!

Allison Mattingly, Red Brick's marketing manager, tells us that the company actually began offering such a deal roughly six years ago -- after being pitched on the idea by a prospective tenant. "He knew we had lots of Soulard apartments, and he wanted to know whether we'd be willing to lease him a place for Mardi Gras," she says. "We couldn't see any reason why we wouldn't."

So for the last five years or so, the short-term leases have been a word-of-mouth thing. "We'd get the same people doing it year after year," Mattingly admits. "This is the first year we've taken the time to market it." The company plans to offer a dozen or so unfurnished apartments, depending on how many apartments it has vacant in late February; people who put money down now get put on a list where they get their pick of apartments in the order that their down payment is received.

Interestingly, Red Brick is also asking for a $1,000 deposit.

We couldn't help but wonder why they'd assume that anyone who'd be interested in this offer might be inclined to break things or deposit bodily fluids in weird places or generally cause a thousand bucks worth of damage. Huh.

But, for the record, Mattingly swears that these tenants aren't the drunk-and-disorderlies of our imagination: "Almost every single person who's done it has gotten their full deposit back." And the one tenant who had to chip in, she swears, only had 50 bucks or so taken off their deposit for a little minor cleaning.