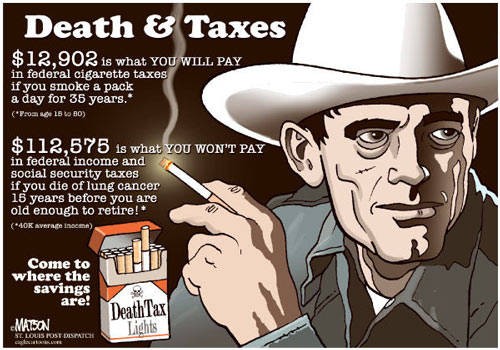 With Missouri scrambling for money to fund its budget, you'd think that hiking up the state's lowest-in-the-nation cigarette tax of 17-cents per pack might be an easy place to start.

Think again. As St. Louis Public Radio reports state Rep. Mary Still (D - Columbia) has filed two bills to raise the state cigarette tax. One would hike up the tax by an additional 12 cents per year and bring in an estimated $68 million in revenue. Meanwhile, Missouri would still have the nation's lowest cigarette tax at 29 cents.

Still's other proposal would raise the tax by a dollar and bring in an estimated $500 million. And while that second solution sounds like a lot, it would still place Missouri below the national average of $1.45 per pack.

But, as has been the case in years past, it seems Stills bills are destined to failure. House Speaker Steve Tilley has said he'll allow the bills a hearing, though they're not expected to go anywhere with a Republican legislature bent on reducing taxes and a Democratic governor who's also drawn a line in the ash cigarette taxes.

What's more, because of the size of the $1 tax hike, Missouri voters would have to approve the measure under the state's Hancock Amendment. The 12-cent measure, however, could probably squeak by without a statewide vote.

Our sister paper in Kansas City has a suggestion for Governor Jay Nixon on that one. Don't call the price hike a tax. Instead, do what Minnesota's former governor Tim Pawlenty did. Call it a "health impact fee."