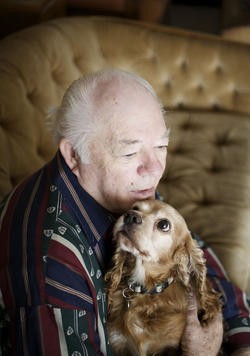 At 11 a.m. today, the Missouri House of Representatives will continue its committee hearing focused on three bills that could either gut or outright repeal Prop B, the ballot initiative to overhaul regulation of dog breeders.

Prop B, also known as the Puppy Mill Cruelty Prevention Act, won support from 52 percent of state voters last November. But as RFT's Kase Wickman pointed out in this blog post, that tight margin of victory disguises two vastly different levels of support.

In urban areas, including St. Louis, voters loved Prop B; in the state's rural center, they hated it.

And that's emboldened rural legislators to propose bills that would, literally, overrule the will of the majority of state voters. On Tuesday, three bills to gut Prop B got hearings in the House Agriculture Policy Committee; yesterday, two were heard in the equivalent committee of the state senate.

Daily RFT checked in with Tim Rickey of the American Society for the Prevention of Cruelty to Animals, or ASPCA. Rickey attended committee hearings both on Tuesday and Wednesday and was able to testify against the bills on Tuesday. (On Wednesday, the committee ran out of time before Rickey got a chance to talk.)

Suffice it to say, while Rickey expressed gratitude for the chance to talk, he didn't exactly intimate that things were going well for Prop B supporters.

"Both hearings have been in front of the agriculture committees, and the representatives on those committees are clearly favorable to the breeders on this issue," he says. "Much of the testimony was in favor of their bills to repeal or strip the initiatives. And all the questions were negative for Prop B."

Rickey called the experience "very discouraging and pretty frustrating." But, he added, "I still have hope. Fifty-two percent of voters across the state of Missouri voted in favor of this. I'm hopeful that the people who voted for it will call their legislators and let their support be heard."

Any bills that are approved in committee then go to the floor of the full House and Senate for a vote. And Rickey predicts that's only a matter of time (and formality).

"These bills will go to the floor," Rickey says. "There's no question about it."

For more details about the components of Prop B, see our feature story here. To get involved with the ASPCA's fight for Prop B, see this link.