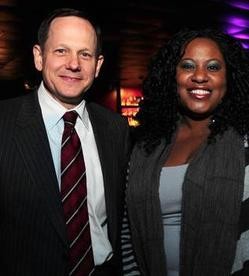 DailyRFT had a chance catch up with Mayor Francis Slay last night at Riverfront Times' Web Awards. (The mayor, btw, had a great time, according to his tweets.)

After discussing social media with Slay -- a nominee for our category of Best Twitterer -- I asked the mayor his thoughts on St. Louis' bid for the Democratic National Convention.

Slay said he still wasn't sure but that he once again pitched St. Louis to Barack Obama last week while attending a mayors' conference at the White House.

"I came up to him and told him that, first, I really liked his speech (marking the 50th anniversary of JFK's inauguration) and, second, that St. Louis really wants to host the convention," said Slay.

"I think I caught him off guard," said Slay. "He looked over his shoulder into the crowd and said, "Well, I think Mr. Foxx (Anthony Foxx the Mayor of Charlotte) over there might have something to say about that." (Foxx told reporters last week that Obama wasn't tipping his hand to him either.)

Slay told me he believes the decision will come any day and that St. Louis has the advantage over Charlotte in terms of infrastructure. "There's no question that we have the hotel rooms and other amenities that Charlotte just doesn't have at this time," said Slay, who added: "Regardless of what happens we should be proud that we made it this far."

The other finalists for the convention are Minneapolis-St. Paul, which hosted the Republican National Convention in '08, and Cleveland.

P.S. In regards to social media, Slay says he pays someone out of his campaign fund to monitor his Twitter feed and respond to inquiries. Tweets directly from the mayor are signed off with an #fgs. "I monitor the feed, but there's no way I can respond to everyone," said the mayor while toying with his Blackberry. "When you think about it, our office handles exponentially more communications than any previous mayor thanks to email and social media. It keeps us busy, but it's all part of the job."