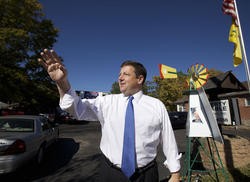 Just three months after losing his U.S. Congressional race to Russ Carnahan (and not being a good sport about it), Ed Martin seems poised to jump into the 2012 senate race against incumbent Claire McCaskill.

Yesterday the Tea Party politician posted a statement about the senate race on his website that didn't say for sure that he'd run but damn well hinted at it.

"...my wife Carol and I are considering a run for Senate very seriously," writes Martin.

Among the people encouraging Martin to get in the race is Phyllis Schlafly, of the Eagle Forum, who recently rankled DailyRFT readers with her comments that respecting homosexuals was counter to her beliefs. Martin, meanwhile, is brimming with Schlafly's endorsement, writing on his site that he's "particularly gratified" by her support.

"Senator McCaskill must be defeated. Her defeat begins with a strong conservative nominee in 2012."

Martin would face competition in the Republican primary. Former Missouri treasurer Sarah Steelman has already announced her bid for the G.O.P. nomination in 2012. Former Senator Jim Talent is also being discussed as a possible candidate to unseat McCaskill, who defeated him in 2006.