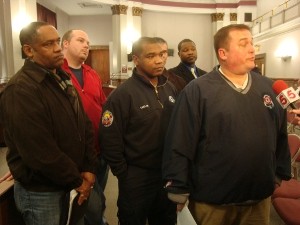 St. Louis firefighters won a small victory at City Hall yesterday when union leaders forced a committee of aldermen to hold off on voting for a bill specifying that reimbursement for retirees' unused sick days must come from a fund controlled by the fire department -- not the city.

The bill was crafted simply to re-affirm an existing ordinance, which, to the city, seemed like a slam dunk. But plans were scuttled when the focus of yesterday's hearing quickly shifted to the city's admission that, over the past decade, millions of taxpayer dollars have been channeled into a special firefighter fund that the government hasn't actually needed to finance since 1993. The city's attorney, Michael Garvin, called the oversight a mistake that was discovered a couple months ago.

Garvin couldn't immediately put a price tag on how much money was channeled into that fund, known as the Future Benefits Fund. But he said that if the city stopped subsidizing the fund now, it would save about $1 million a year.

The reaction among the aldermen serving on the Committee of Public Employees ranged from confusion to disgust. "I'm finding it almost impossible to believe that we sit here all this time and didn't know what was happening," said Alderman Charles Troupe. "All of a sudden the city's broke and we make this great discovery?"

Alderman Jeffrey Boyd echoed the concern: "You mean there's been this account sitting there with x-amount of millions and no one sees it being replenished? It doesn't make sense to me."

Overall, it was an embarrassing day for all parties: the city admitted its lack of vigilance, the firefighters shrugged off the fact that their trustees had overbilled the city for a decade, and the aldermen were so confused, Committee Chairman Matt Villa decided to postpone voting on the measure to clean things up.

To add to the confusion, the debate surrounding unused sick pay for firefighters is ongoing in court as well; last fall, the city put a freeze on unpaid sick leave, which prompted a lawsuit and a countersuit. Yesterday, several aldermen suggested the bill in question should be put on hold until the legal issue is resolved, even though that's sure to take months.

The bill, which was drafted by the mayor's office, is not controversial per se; it only seeks to formally certify an existing law stating that pension money padded with unused sick-leave dollars must be drawn from the designated Future Benefits Fund -- which hasn't been happening. The fund now contains $4.6 million, kept alive by taxpayer dollars and interest.

If the bill does somehow get passed, Chris Molitor, president of the International Association of Fire Fighters, Local 73, promises another lawsuit. "The introduction of this bill is another attack on the brave men and women who put their lives on the line to keep the city safe," he tells Daily RFT. The firefighters don't care where the money comes from; they simply feel they should be paid in a just fashion.

Bottom line: The firefighters won yesterday's battle, but they'll be hard-pressed to win the war. Based on the day's testimony, the law seems to be in the city's favor, and new legislation might be required to change it. That said, it seems doubtful this particular bill will be passed any time soon; the firefighters are calling it a sneak attack. (Considering that no one seems to fully comprehend it, they may have a legitimate argument.) At minimum, the union has shown it'll be difficult for the mayor's office to wage the war on the legal and legislative battlefields simultaneously.