For the second time this month hunters in Missouri have shot and killed a mountain lion despite laws protecting the animals. And once again, no one will be charged with violating the wildlife code.

Matt Wolken, northeast supervisor for the Missouri Department of Conservation, tells DailyRFT that the hunters who killed a 128-pound mountain lion Saturday in northeast Missouri feared for their lives.

According to Wolken, about 90 Amish farmers were involved in a "predator hunt" January 22 in which they hire "English men" (a.k.a. non-Amish) to drive them around to different hunting sites. Around 3 p.m. Saturday, the men had surrounded a multi-acre farm near Macon and were walking to the center of the property, looking for coyotes and other small predators.

"These are small farmers who lose chicken and other animals to coyotes each year," explains Wolken. "They have a legitimate concern with hunting predators. They use shotguns and ignore other game they come across."

Wolken says the men had no idea they'd stumble upon a mountain lion. "One of them walked past a cedar tree and the mountain lion appeared out of nowhere. It was about twenty yards away -- two hops and a pounce -- and it scared him to death. He shot it, and the animal went running past another hunter who also fired a shot."

The animal lay down, and a dozen men surrounded the animal thinking it was dead.

"It popped up and was shot again and died," says Wolken.

Missouri Wildlife Code strictly prohibits the hunting of mountain lions, though they can be killed if they're attacking livestock or domesticated animals or threatening human life. Wolken says that he and his investigators have no doubt that the first two men who shot the cat Saturday had a legitimate fear for their safety.

Rex Martensen, head of MDC's Mountain Lion Response Team, says he's aware of the public perception that can come from Saturday's killing and the decision not to charge the hunters.

"We don't want people to think it's open season on mountain lions in Missouri," says Martensen. "We do not condone the indiscriminate killing of wildlife." 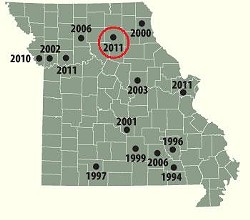 And while that shooting may have been justified, it's harder to make the same argument with the killing of a 115-pound mountain lion in Ray County on January 2. That's when James "Jimmy" McElwee and his dogs treed a mountain lion while out hunting raccoons. McElwee shot the trapped animal and then had a friend lie to investigators saying that he shot the animal and not McElwee.

Even after MDC officials determined that McElwee and his friend were fibbing, they still didn't press charges, believing that McElwee actually feared for his life.

But did a mountain lion trapped in a tree really pose a threat to McElwee? Especially considering he was armed and protected by dogs?

According to the conservation department's own website the "risk of a mountain lion attack in Missouri is very, very small -- almost non-existent. People, livestock and pets are at much greater risk from automobiles, stray dogs and lightning strikes than they are from mountain lions." Moreover, there is no substantive evidence that mountain lions have attacked livestock, pets or people in Missouri; the big cats tend to avoid people at all costs.

Martensen tells Daily RFT that the difficulty in charging people for shooting mountain lions is that fear is a subjective emotion.

"That's an issue that's going to come up at the investigation stage, the prosecutorial stage and the judicial stage. What was the true level of threat?" says Martensen. "The problem we have here in Missouri is that the animals are so unknown. People think they pose a much bigger danger than they do."

Martensen can't explain why so many mountain lions have been spotted recently in Missouri. Just last week the Missouri Department of Conservation confirmed the sighting of a mountain lion in suburban St. Louis. Another mountain lion was observed in November in Platte County in western Missouri.

That's four in three months. Since 1994, there have only been 14 confirmed sightings of the animals in the state. Prior to that a cougar hadn't been seen in Missouri since one was shot in the bootheel in 1927.

"With the number of raccoon and deer hunters we have in this state -- not to mention the thousands of trail cameras we have -- if there was a large number of cougars in Missouri, we'd know about it," Martensen tells Daily RFT. He believes the cats wander here from western states and don't breed in Missouri. "We'd also be having a lot more mountain lions hit by cars -- one every few months instead of every few years."