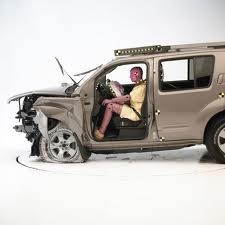 Jeanne Moore, a 300-pound St. Louis County woman who was left a paraplegic after a 2005 car crash, should have the right to bring her lawsuit against Ford Motor Company to trial, the Missouri Supreme Court ruled in an opinion issued today.

Moore was driving a Ford Explorer in 2005 when she was struck from behind by another vehicle. The impact from the crash combined with her weight was apparently enough to cause the driver's seat to collapse backward, fracturing Moore's vertebra as she hit the back seat.

Moore and her husband sued Ford, alleging that the company had failed to warn her that the seats in the Explorer were not designed for obese people -- or that the seats might collapse in a car accident.
The case went to trial, but after the Moores presented their case, attorneys for Ford argued for a directed verdict -- in essence saying that the couple had failed to prove their case alleging negligent design, and that the judge should rule for the auto manufacturer on that count without even hearing their defense.

At the time, the judge agreed. (The jury, asked to consider only whether Ford was liable for a "strict liability design defect," ruled in favor of the auto company.)

In its opinion, the Supreme Court notes that Jeanne Moore argued that a warning would have prevented her from buying the SUV:


But Ford argued that it could not be sued for failing to make a warning that would have affected Moore's decision to purchase -- only for a warning that have altered her conduct at the time of the accident. The trial court agreed.

That, the Missouri Supreme Court ruled today, was incorrect.

Ford argues that the type of danger presented by its seats is not amenable to a simple warning because the seat is safe for use by people of Ms. Moore's weight in normal driving conditions and in most accidents, other designs present other dangers, and the risk of danger varies with the type and speed of the accident. Ford argues that because the Moores never state precisely what an appropriate warning would have said, such a warning could not be realistically made; the Moores, therefore, failed to make their case of failure to warn. This Court disagrees.


The court's ruling was 4-2 in favor of the Moores, with a dissent penned by Chief Justice William Ray Price.