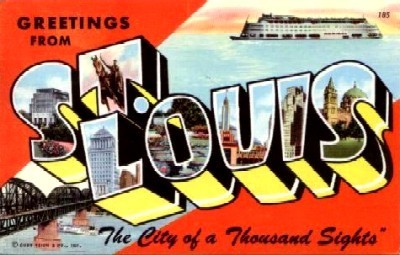 It's been the conventional wisdom for years, if not decades: College-educated young people are fleeing old "rust-belt" cities like St. Louis for warmer, sunnier and more stylish metropolises. Politicians have filled newspaper op-ed pages with essays bemoaning the brain drain. Academics like author Richard Florida have made careers out of trying to help cities attract and retain the "creative class."

Turns out, all we needed was a little recession.

As the Brookings Institution's William H. Frey writes in a new report out today, the bad economy has "led to an even further plummeting of the nation's already historically low levels of long-distance migration...the stall has affected college graduates and young adults -- groups usually among the most mobile and coveted -- which tend to be the lifeblood of the labor force and responsive to shifts in national job networks."
Frey continues,

Between 2008 and 2010, the annual interstate migration of this group fell to 2.1 percent, well below the levels of 3 percent and above earlier this decade and in the 1990s. This is indicative of young adults entering a brutal job market, as many double up or remain at home with their parents or other families.


That's bad news, right? All those dreams, deferred? All those kids longing to move to the big city, but instead stuck at home with mom and dad?

Um, not really. Not if you're St. Louis.

Because if people are stuck here, they can't move to Las Vegas!

"Many metro areas that were losing adults with college degrees in mid-decade started holding onto more of them as the housing and labor markets froze," Frey writes. "Prime examples are New York and Los Angeles, where annual migration losses abated sharply. Others such as Buffalo, Cleveland and Chicago experience smaller brain drains due to lack of opportunities elsewhere."

And St. Louis is apparently a beneficiary of this trend, too. Just check out this chart from the Brookings Institution. "Lack of opportunities elsewhere" apparently meant that half as many St. Louisans got the hell out of here in 2007 to 2009, as compared to the two years prior.

Naturally, Richard Florida et al sees this as good news -- places like St. Louis agonized how to keep young people, and now they get to keep them. (See Florida's essay here, which presents a decidedly rose-colored-glasses take on the trend.) Slate.com also gave us a shot out, noting that "places like St. Louis, Pittsburgh, and Baltimore, whose leaders have made an effort to transform themselves from manufacturing towns into knowledge-based economies, saw significant gains in the number of young people headed their way."

Considering that both Florida and slate.com seem to have done no research other than paraphrasing the Brookings Institution study, we're not sure just where all the optimism comes from, much less Slate's assertion that there are "signficant gains" in the number of young people headed to the Lou.

As the Brookings Institution's Frey warns:

The recent more tentative migration patterns of the younger and "best and brightest" segments of our population are holding back the free flow of human and social capital that has made our society more vital and dynamic than most of our developed country peers. This slowdown, in addition to the decline in immigration, can be expected to pick up when the economy revives.  But if it takes too long, we run the risk of creating a "lost generation" of young adults, the likes of which we have not seen for some time.

To recap: The good news is that more young people are staying put in St. Louis. The bad news is that, by not moving to Austin, Texas, or Seattle or San Francisco, they're putting our country's very vitality at stake.

We just can't win in the Rust Belt, can we?