Nixon Strikes a Frugal Tone as St. Louisans are Outed as Cheapskates 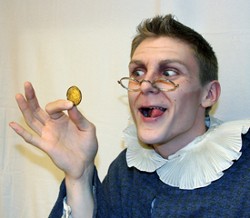 Yesterday was a big day in Missouri frugality. Gov. Jay Nixon proposed $300 million in budget cuts during his State of the State address -- even as the website Coupons.com ranked St. Louis as the fourth-cheapest city in the country.

Nixon outlined a plan to knock down the state's 2012 budget to $23.2 billion. That sounds good to us. But we wonder what would happen if he axed his entire team of financial advisers and recruited a new team from the local St. Louis dollar store; it seems that we misers really know what it takes to balance a budget. That south-city lady in aisle seven comparing the prices on canned beans? Now that's who I want in charge of my tax credit program.

Nixon's proposed cuts included $67.4 million to Medicaid, $53.6 million to four-year colleges and universities, $38.1 million to government staff, and $10.2 million to community and technical colleges. He also proposed to increase revenue by axing certain tax credit programs and launching a tax amnesty program that would give breaks to Missouri residents who are late with their payments. He said the plan would ensure that no one's taxes would be raised

Apropos of Nothing Politics