Airis Family Loses Appeal to Get Native American Artifacts Back 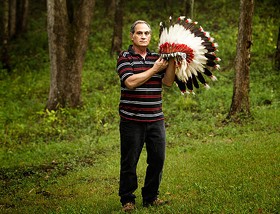 Kevin Airis isn't going to get his grandfather's missing Native American artifacts back from the Saint Louis Science Center anytime soon. Yesterday the Missouri Appellate Court upheld an earlier judgment that Airis waited too long to request the missing items from the science center.

The Airis family last saw the artifacts in 1974 when Kevin's mother, Jewel, delivered 47 items to what was then the St. Louis Museum of Science and Natural History for safekeeping. (It later evolved into the Saint Louis Science Center.) Vandals had attacked the home of Thomas Airis, Kevin's grandfather, who had collected the war bonnets, beaded belts and ceremonial clothes during numerous trips to the southwest in the 1940s and 50s. The family thought Thomas's things would be in good hands in a museum.

Jewel Airis assumed the items were safe and didn't ask for them back until 2006. The science center returned eleven items and claimed Thomas Airis had reclaimed the remaining 36 back in 1975. Former curator James Houser had issued a receipt, co-signed by Thomas Airis. Kevin Airis now claims that receipt had been forged, a claim the science center vehemently denies.

The Appellate Court upheld an earlier summary judgment in favor of the science center, which claimed that the Airis family had far exceeded the five-year statute of limitations to ask for their things back, which began upon the delivery of the items in 1974. Airis claimed that the statute of limitations had begin to run in 2006, upon Jewel's first official request for their return.

[The science center] counters that [Airis] and his predecessors were on notice of the loss as early as 1974, when the Science Center sent a letter acknowledging receipt of only some of the items....It is not a necessity for us to determine with absolute certainty the date of the loss as it is obvious that the items in dispute in this case were "lost" more than five years before 29 May 2008, the date [Airis] originally filed this case.

You can view the entire judgment after the jump. Opinion ED94807