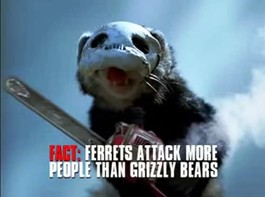 You'd think that most commenters to our story yesterday about a pet ferret eating off the fingers of a baby in western Missouri would have expressed outrage with either A) the parents of the infant or B) the animal itself.

Nope. Most commenters are angry with Daily RFT for the photo we used to illustrate the article. The image shows a ferret with its mouth open exposing its fangs. Is it yawning, or is it about to make a meal out of a human baby? It's hard to tell, though the animal certainly looks somewhat aggressive.

And that's not all that uncommon, according to other stories written about ferrets attacking children. That's right, ferrets -- those adorable domesticated weasels -- have been known to strike before and its not pretty, leaving the victim's skin and tissue looking like "ground beef."

In California, a pet ferret has been blamed for killing a baby. Dozens of other children in the Golden State have also been mangled by the critters, which may confuse infants with prey, according to an article in the Journal of American Academy of Pediatrics.


"The animals seem attracted to babies, perhaps due to odors resembling those of suckling rabbits," writes Dr. Edward Marcuse in a 1987 edition of Pediatrics. "Typically, attacks are made when parents are absent or asleep; the ferret escapes its cage and jumps into the baby's crib. One infant died; others nearly bled to death. One lost her nose, another half of both ears. Up to hundreds of bites were rapidly inflicted on all parts of the face, the result resembling ground beef according to some observers, although all exposed parts of the body are attacked as well. Older children and adults were bitten on the face and extremities, the animal often holding on tenaciously until killed or pried loose."

A story out of Wisconsin in 2000 told a similar story when two ferrets attacked a baby, who was saved when the family dog jumped into the melee and rescued the infant.