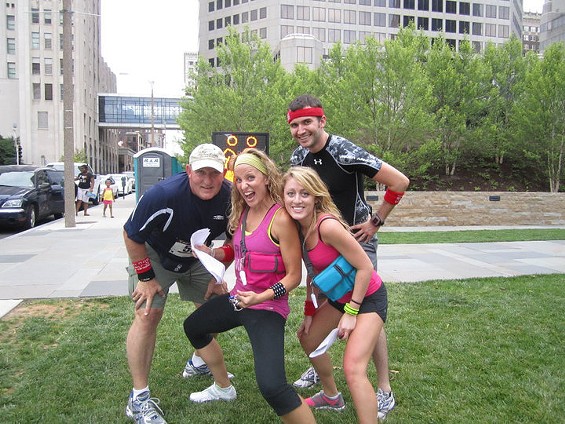 If you were instructed to go a Central West End establishment called 3.14159, and then report to the "oculus tavern" across the street, where would you go?

If you answered Eye Bar -- the eyeglass shop just across the street from Pi at Euclid and McPherson -- then you are a natural-born urban racer!

And if that news isn't exciting enough for you, here's this: St. Louis is going to have just the event for you. This June, for the first time, the CitySolve Urban Race crew is hosting a race here.

CitySolve sponsors races throughout the country -- from New Orleans to San Francisco to Philadelphia. The winners of each city race are eligible to compete for the national championship (and the $5,000 grand prize) in Las Vegas November 5.

This year, for the first time, St. Louis is on the CitySolve agenda.

So how'd we get so lucky?

As it turns out, our good fortune actually began last year, when a pair of Phoenix-based adventure-racing enthusiasts, Christy Bacon and Jill Diamond, organized a series of evening urban races called Twilight Town Treks. (Full disclosure: Diamond is a friend of the author of this post.) Twilight Town Treks went to three Arizona municipalities, plus Indianapolis and St. Louis.

Why St. Louis? Well, Diamond's sister lives here. And, Diamond tells Daily RFT, "none of the other national urban adventure races came there." Oh, and this: "I love the city."

The St. Louis Twilight Town Trek in June 2010 drew 42 teams. And so this year, when Diamond and Bacon decided to team up with CitySolve and move their races to the daytime, that showing was good enough to convince the organizers that St. Louis was worth keeping.

This year's race will kick off at noon on June 25. And while we can't guarantee they'll be using the Pi question again -- in fact, the organizers' willingness to share it with us suggests not! -- we do hear this thing is loads of fun.

You don't even have to be athletic to compete, Diamond says, although athleticism helps. Mainly, you need to be smart. (See CitySolve's FAQ for a sense of how this all works.) It's kind of like The Amazing Race, only it takes a few hours and you never leave the county.

"If you can walk five miles, you can do the race," Diamond promises. "Even non-runners do well because it takes smarts and strategy to solve the clues and complete the challenges. There is also strategy in the route you map out and how you decide to get to all your destinations -- should you run or take the Metrolink? Wait for the next train or start walking?"

CitySolve is offering an early-bird discount through January 16, so register now to lock in your savings.

Oh, and you might want to start studying up, too. If you want to make it Vegas, having some vague idea about local geography just ain't gonna cut it.