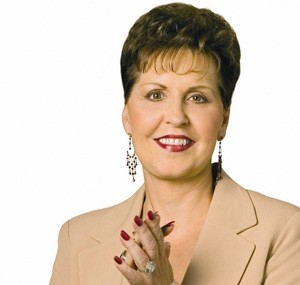 Joyce Meyer Ministries of Fenton has "responded fully" to a federal probe of televangelist churches, and its "extensive reforms" are "commended," according to the final report released yesterday.

This in contrast to four other churches in other states whose members acted totally skittish and refused to hand over financial docs.

Senator Chuck Grassley (R-Iowa) had launched the Senate Finance Committee investigation in November 2007, concerned about "governing boards that aren't independent and allow generous salaries and housing allowances and amenities such as private jets and Rolls Royces."

Joyce Meyer Ministries joined the Evangelical Council for Financial Accountability in 2009, which requires financial transparency from its members. The final report released this week exonerates her further.

Not so much for four other churches that didn't fully cooperate. Grassley's staffers write that when they did contact folks from those ministries, some of them:


insisted on complete anonymity while others were too frightened to speak with us even anonymously. Some had received warnings from the churches that they would be sued if they violated confidentiality agreements they had signed. Even though we explained that a subpoena should protect them from retaliation, including lawsuits, some became even more frightened when offered a ―friendly subpoena. They became concerned about needing an attorney and still feared retaliation by the churches. As a result, we believed that issuing subpoenas to informants would be counterproductive.

Those uncooperative cults ministries were: