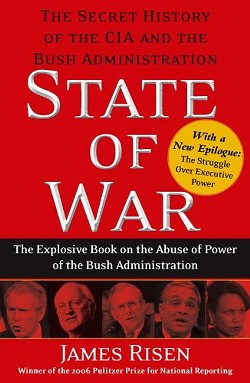 Jeffrey Sterling, a 43-year-old resident of O'Fallon, Missouri, who now works as a fraud investigator with the health benefits company WellPoint, was arraigned yesterday in federal court in St. Louis accused of leaking state secrets to the media.

From 1993 to 2002 Sterling worked for the CIA. Court records indicate that he was often at odds with the agency, filing complaints about the organization for discrimination and later for its refusal to let him publish certain accounts of his work as a spy.

The indictment handed down yesterday accuses Sterling of violating federal law by stealing classified documents and sharing that information with a newspaper reporter and book author.

The writer is not named in the indictment, nor is the type of information that Sterling allegedly shared with the journalist. However, as multiple media agencies report, the writer was most likely James Risen, a reporter for the New York Times who published a book in 2006 called "State of War: The Secret History of the C.I.A. and the Bush Administration."

One chapter of that book, presumably taken from Sterling's conversations with Risen, tells how the CIA -- through a Russian intermediary -- provided Iran with designs for a triggering device for a nuclear weapon. The design had a fatal flaw but may have contained enough real information to actually benefit the Iranians.

Risen has declined to comment on whether Sterling was his source but did tell his employer that he has "never testified and never provided the government with any information." In 2002 Risen wrote a story for the Times discussing Sterling's racial discrimination case against the CIA. At the time, Sterling was upset that the agency had turned him down for a field job in Iran. According to Risen's article, one of Sterling's superiors told him that as a ''big black man speaking Farsi,'' Sterling ''stuck out'' and would draw too much attention to the agency's secret Iranian agents.

The Times notes today that Sterling is one of five former governmental officials who've been charged with leaking information since President Barack Obama took office.

Sterling has pleaded not guilty. A detention hearing is scheduled for Monday.