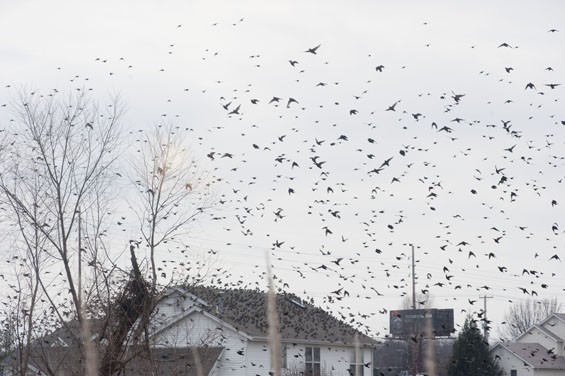 If you live in St. Charles, you may have noticed a large, dark cloud swiftly moving by. And this wasn't another tornado. It was hundreds, possibly thousands, of birds.

But don't get alarmed. Despite what you may be hearing about random masses of birds, this isn't a harbinger of doom -- and the apocalypse isn't here yet, says Craig Lanham, vice president of conservation for the St. Louis Audubon Society.

"That's common in the winter. Certain blackbirds, what they'll do in the winter is they'll roost together," he says. "They do that for several reasons, basically to get through the winter for mating season. And it's safer for predators and things."

According to Lanham, this sort of sighting is common in more open, less urbanized areas.

Suffice it to say, however, these avians are joining a long line of birds behaving weirdly. Last week, thousands of dead red-winged blackbirds rained down onto Beebe, Arkansas, on New Year's Eve. Many attributed the deaths to the fireworks that night, but bird carcasses were still sent for testing. Days later, Baton Rouge experienced similar mass bird deaths.

But experts say it's unlikely that St. Charles -- or St. Louis -- will play host to the next mass grave for birds falling from the sky.

And Lanham says the deaths, although strange, are not as uncommon as people might think. The deaths can be caused by a number of things. Greg Butcher, Audubon's Director of Bird Conservation, lists "starvation, storms, disease, pesticides, collisions with man-made structures or human disturbance" as causes in this Audubon press release.

And what about a possible uprising of these flying critters?

Lanham says he doubts it. "At least I hope not," he adds.