Ass Clowns Off to Rollicking Start in 2011; Vote For Yours Today! 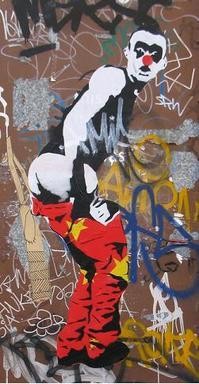 Oh, my. Where to begin? 2011 is just seven-days-old and we're having trouble narrowing down the field for this week's Ass Clown. Must've been something in that $6.99 bottle of Asti Spumante on New Year's Eve that has everyone acting the fool.

Here, then, are the candidates who bubbled their way to the top.

1. Ronald Partee: The former executive for Goodwill pleaded guilty this week of "parteeing" on the charity's dime. Partee confessed to embezzling $1 million from Goodwill and using the money to buy himself a Porsche and have the charity reimburse him for law school -- which he never attended despite throwing himself a party when he told colleagues that he'd earned his degree.

2. Dustin Ries: The St. Louis police officer was caught on film beating the living crap out of a drunk suspect on New Year's Eve. Ries, 37, has been accused on two other occasions of using excessive force during arrests.

3. Ferhatovic Family: Omer Ferhatovic, 52, and his sons Elvis, 25, and Hajro, 22, were charged this week with looting homes in Sunset Hills destroyed by the tornadoes that ripped through region December 31.

4. James Davis: The nineteen-year-old from East St. Louis was charged this week with raping a four-year-old girl and giving the child chlamydia and gonorrhea.

5. Drugged Dialer: A Caruthersville drug dealer is behind bars this week after he mistakenly mis-dialed the number of one of his junkies and instead reached the police. Unknowingly, the man then tried to carry out the drug deal with the officer who played along and arranged for the drug buy on the courthouse steps where the drug dealer was arrested.

Cast your vote below!