St. Louis to Host First Slave Auction in 150 Years; Bidders Get Chance to Split Up Family 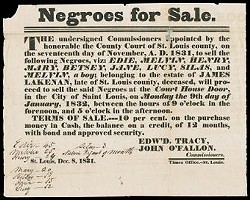 One might think that getting African-Americans to volunteer to be sold as slaves would be a difficult proposition these days.

Not at all, says Angela da Silva, a professor of black history at Lindenwood University who frequently portrays a slave woman named "Lila" at the Daniel Boone Home in St. Charles.

"I have to turn people away," says the 56-year-old da Silva of her troupe of about a dozen slave re-enactors. "The problem today is that most blacks don't know enough about slavery. It's not taught in schools, or it's simply ignored. Reliving slavery this way provides today's generation with a whole new appreciation of what people went through."

Still, da Silva considers a reenactment scheduled for downtown St. Louis next week a major coup as it may very well mark the first time since June 10, 1862, that the steps of the Old Courthouse plays host to a slave auction.

"I know of no other such reenactment like this ever occurring here," says Bob Moore, the historian for Jefferson National Expansion Memorial that includes the Old Courthouse. (That's the same building, btw, where former slave Dred Scott argued for his freedom in 1850 in a case that helped prompt the Civil War.)

The slave sale to occur this January 15 at the Old Courthouse comes as the region looks to commemorate the sesquicentennial of the start of America's bloodiest war that killed some 600,000 people.

"Starting off with a slave sale ensures that slavery will be the focal point of this year's events," says da Silva, who rallied to have her auction prior to a more traditional Civil War reenactment scheduled for the first weekend of May in Jefferson Barracks.

Next week's auction will include some fifty reenactors representing the various characters who may have shown up for that last slave sale in St. Louis in 1861. That includes German abolitionists, Bible-thumpers, Union soldiers occupying the city, a Kentucky tobacco farmer and an auctioneer who specializes in nineteenth century bidding.

A stickler for authenticity, da Silva says the reenactors will portray actual slaves sold from the courthouse steps as obtained from court records. 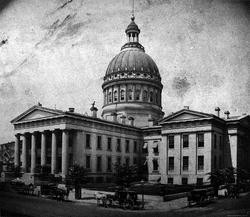 "It'll be a typical sale," promises da Silva, who also operates a travel company focusing on the "Africa diaspora" called National Black Tourism Network. "These aren't celebrites. They're just the kind of ordinary slaves that would've been auctioned at the time -- including a pair of orphan sisters who bidders can either purchase together or separately."

Moore, of the national park service, says he hopes that the reenactment will spawn discussion.

"When we discuss the war today, we often do so in context of generals on a hillside or the graves of soldiers, and not the core issue that caused the war," he says.

The slaves auctioned January 15 will be shackled in replica irons that da Silva had made according to the exact measurements of manacles she uncovered last fall in Mississippi while she and her slave posse participated in a reenactment for the History Channel.

"We were captured by Confederate foragers and had to spend three days in prison camp," says da Silva of the History Channel segment. "Finally we were rescued by General Grant."

Continue on to check out a description of the slaves up for sale at the January 15 auction.
SaleFlyer[1]