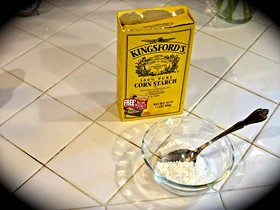 Last spring, you may recall, Washington University physicist Jonathan Katz got kicked off a panel assembled by Secretary of Energy Steven Chu that was supposed to figure out how to stop the BP oil spill. Katz's banishment had less to do with his scientific acumen than with his views on homosexuality which are controversial, to say the least. (More bluntly, Katz is an avowed homophobe, and his stance hasn't changed much since his son Isaac came out of the closet last fall.)

It's really too bad that Katz's gender politics got in the way of his work because a recent experiment has proven that Katz's proposed solution to stop the leak would have been far more effective than the one BP did use, which failed and left the well gushing for another two months.

Katz's proposal: cornstarch. Yep, the same stuff you use to thicken your puddings and pie fillings.

Chu's panel had recommended that BP use a top-kill procedure, which involved pouring heavy mud down the wellbore. Katz and another physicist on the panel, Richard Garwin, believed ordinary mud wouldn't be enough.

"We were worried that a phenomenon known as a Kelvin-Helmholtz instability [when two fluids move past each other at different speeds] would disperse the dense mud into tiny droplets that would be carried out of the well by the leaking crude oil," Katz said in a Wash. U. press release.

According to Katz and Garwin's calculations, something would have to be added to the mud to make it heavier and suppress the oil droplets, sort of like quicksand. Or oobleck, a substance you can make in your very own kitchen by mixing up a box of cornstarch and a cup of water.

"It can flow slowly as a liquid, but turns stiff and elastic when flow is rapid," Katz explained. "If an instability were to occur, this stiffness would suppress it, and the novel mud would sink in the well, accumulating at the bottom until its pressure became sufficient to stop the leak."

After Katz and Garwin's solution was rejected, they retreated to Lawrence Livermore National Laboratory in California and created a scale model of the BP oil spill out of a six-foot long plastic tube, which they filled with oil.

"We poured cornstarch 'mud' into the top of the oil column and observed that, as predicted, the instability was suppressed," said Katz. "The surrogate 'mud' sank rapidly through the oil to the bottom of the tube." In real life, this would have prevented any more oil from flowing up from the reservoir, effectively killing the well.

As it happened, when BP poured 30,000 barrels of mud down the well back in May, the oil reacted violently, just as the physicists had predicted, and spewed most of the mud back out again, along with a lot of crude oil.

Katz and Garwin recently published the results of their experiments in Physical Review Letters, a peer-reviewed journal. They haven't had a chance to prove whether their experiment would work with an actual oil spill, and Katz said, rather piously, that he hopes they never have to, but, of course, it never hurts to be prepared.