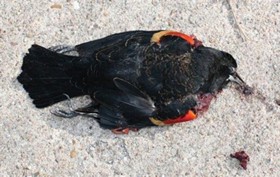 Good news! It's not the first sign of the end of the world! Instead, scientists have come up with a more, um, scientific explanation for why more than 3,000 red-winged blackbirds fell on the town of Beebe, Arkansas, on New Year's Eve.

It was the midnight fireworks.

Karen Rowe, an ornithologist with the Arkansas Game and Fish commission, now suspects that the noise and light from the fireworks disoriented the poor birds, which were flying lower than they normally do, in order to avoid the fireworks. "Blackbirds have poor eyesight," she told the Associated Press, "and they started colliding with things."

Rowe still plans to test the birds for toxins, just to make sure there was not a mass poisoning, but she is pretty confident that the fireworks were the culprit. Other scientists, though, think it may have been a thunderstorm. Which may be logical, except that the National Weather Service didn't report a thunderstorm in Beebe on Friday night.