Wash U Researchers Find Genetic Link Between Obesity and Alcoholism 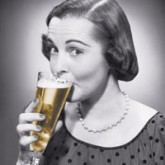 Step away from the cheeseburger, drunky. Researchers at Washington University have discovered a genetic link between risks for alcoholism and obesity. And the correlation seems to be increasing as Americans get fatter, as we've been doing at an alarming rate over the past few decades.

The Wash U. team looked at two big national studies on alcohol: one from 1991 and 1992 and one from 2001 and 2002, with more than 80,000 people participating in the pair of studies. In the later study, people with alcoholism in their family history were much more likely to be obese.

"We looked particularly at family history of alcoholism as a marker of risk," says the study's lead author, Richard A. Grucza, in a press release. "And we found that in 2001 and 2002, women with that history were 49 percent more likely to be obese than those without a family history of alcoholism. We also noticed a relationship in men, but it was not as striking in men as in women."

Grucza posits that the same reward centers in the brain that are stimulated by drugs and alcohol also respond to "hyper-palatable food," the high-fat, high-sugar processed crap that's become ubiquitous in recent years. He says that risks for obesity and alcoholism are "cross-heritable," that is, likely to both occur in the same person, in the ways that risks for alcoholism and drug addiction are.

Actual alcoholics, he says, aren't typically fat because they're malnourished from drinking their meals. Their family members, though, are at high risk for obesity. He says that seeing a family member in the grips of alcoholism can scare a person into abstaining from drink, but such a person might be genetically predisposed to seeking the same kinds of rewards and stimulation from Ben & Jerry's instead of gin and juice.

The fast increase in the correlation is a remarkable measure of how much food has changed. "The environment is what changed between the 1990s and the 2000s," Grucza says in the release. "It wasn't people's genes." It's simply much easier now to find those "hyper-palatable" foods and binge on them than it was even twenty years ago.

Grucza and his team published their findings in December's Archives of General Psychiatry.