Bring it On! Missouri Cheerleaders Sue School for Taking Away Their Pom-Poms 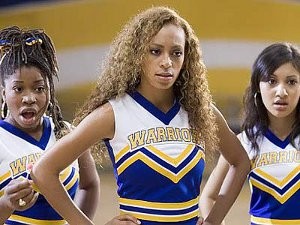 "Mean Girls" has come to Missouri.

In a made-for-Hollywood subplot that would make Lindsay Lohan blush, two cheerleaders from a state championship team have filed a federal lawsuit against their southwestern Missouri school district, claiming their civil rights were violated after being booted off the squad for allegedly cyber-bullying another student.

The mean girls were kicked off the Seneca High School squad this summer, without a chance to defend themselves before the board. Their claim is that they were deprived of their pom-pom rights without due process and suffered alienation and harassment as a result. One of the plaintiffs was the captain of the team, a potential All-American, and now her shot at a college scholarship might be down the drain.

The case presents an interesting set of questions: First, is it within a school's rights (and code of ethics) to punish students for an offense that occurred off-campus? Moreover, do students have a constitutional right to cheer? And can a school justifiably hold student-leaders like athletes or student-council officers to a higher account than others?

The latter question is perhaps the thorniest in the cheerleading case. When the mean girls were kicked off the squad, the school's policy handbook didn't include a "good citizen" clause, which requires student-leaders (like cheerleaders) to behave in a model way. Shortly after the girls were forced to hand in their skirts, however, another scandal erupted when football players were nabbed for hazing. Criminal charges soon followed, and a good-citizen clause quickly found its way into the school's policy handbook.

Tom Mickes, a St. Louis attorney representing the school district, tells Daily RFT that it shouldn't matter whether a good citizen clause is enacted by an individual school, because the requisite language is a part of the bylaws for the Missouri State High School Activities Association. In other cases, he says, federal courts have held that participation in high school athletics is not constitutionally protected. "It's a privilege," he says, "and due process doesn't apply."

According to Mickes, it's impossible for schools to have an explicit rule for everything. Violations can occur without written rules or explanation, he says. Sometimes, it's one strike and yer out.

What's noticeably lost in the swirl of accusations is the alleged cyberbullying incident. According to reports, Principal Tosha Fox was quoted this summer in the Seneca News Dispatch, a local paper with no website, indicating that four cheerleaders were under investigation by the Newton County Sheriff's Department for threatening another cheerleader's life. But the sheriff's office ultimately didn't pursue the case.

"It wasn't a direct threat, so we decided not to prosecute," Deputy Chief Chris Jennings tells us. While hazy on the details of the accusation, he says it involved text messaging. It's possible the threat was passed along through multiple texters before making its way into the phone of the accuser, he says.

Mikes, the school district's attorney, says he can't comment on the details of the alleged cyber-bullying incident because he was just handed the case a few days ago.

The cheerleaders, who weren't identified in the petition, filed the suit against the Seneca school district, seven school board members, the superintendent and the high school principal. They're seeking a jury trial and unspecified damages.