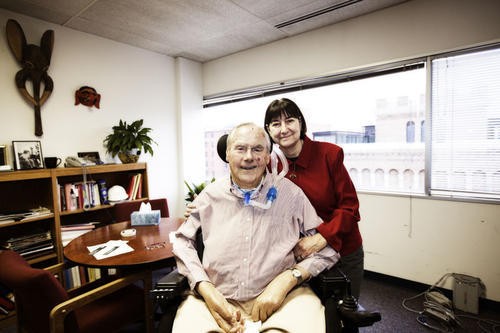 As I began researching my recent feature story about the twentieth anniversary of the Americans With Disabilities Act, I heard the same thing from person after person: "You have to be sure to interview Max and Colleen Starkloff." When it comes to disability rights in St. Louis, the Starkloffs are the city's unofficial historians. I read dozens of local newspaper articles about accessibility triumphs, ADA lawsuits, and the struggle for better public transportation and housing - and almost every story contained a quotation from Max, explaining with concise grandeur why equal access for people with disabilities was important, and necessary.

After a 1959 car accident left him a quadriplegic, independence became Max's lifelong crusade. He lived in a nursing home for twelve years, where he fought to be considered as someone who deserved an education and a job. While in the nursing home, in 1970, he founded Paraquad, an independent-living center.

After he and Colleen married in 1975, the couple continued running Paraquad; they also championed equal rights for people with disabilities. They were always on the vanguard of the latter: The mission of the Starkloff Disability Institute, which Max and Colleen co-founded in 2003, is to help people with disabilities obtain employment - a conduit to full participation in society.

Max Starkloff died on Monday, December 27, owing to complications from the flu. He was 73.

But even in the final months of his life, Max had been far from retired. When I called the Starkloff Disability Institute to set up an interview, I spoke with Max himself; he still worked full-time at the non-profit. He recommended that I speak to Colleen as well -- because what they achieved, they achieved together. They were a formidable team committed to the same goals.

During our interview, the pair's interaction spoke to their 35-year marriage and their successful business partnership. Like any long-married couple, her knowledge base complemented his areas of expertise. They knew almost telepathically which story to tell me, and when Max spoke, Colleen picked up my recorder and held it close to him, so his speaking voice would come across clearly on the tape. She smiled at him tenderly and spoke of his accomplishments with pride -- although a hint of anger crept into her voice when she spoke of how people to this day still ignore him when they walk into a room together, "because they don't know what to say -- they are not comfortable approaching somebody with a disability."

Max told me stories about fighting to change perceptions, and arguing to make others see the importance of independence. "Nobody wanted to hear us when we had to solve a problem," he said. "As long as we stayed in the background, we were heroes. And then we spoke out and got loud." But in our interview, his bulldog-like tenacity manifested itself via quiet intelligence. He shrewdly understood why people reacted the way they did to him and his disability -- and it drove him to promote understanding, acceptance and empathy.

"I've had friends of mine who are very bright, bright people," Max said during our interview. "And they say, 'You must really feel happy, now that you [have] the ADA, everything's taken care of.' And I said, 'Oh no, we're just getting started, I mean, we haven't done anything.'"

But Max Starkloff achieved many things. Because of his tireless capacity for activism, he helped produce tangible things -- curb cuts, wheelchair lifts on public buses, handicapped parking spaces -- which improved St. Louis. He helped thousands of people with disabilities have the same chance for dignity he fought so hard to achieve. He took something very
intangible -- disability -- and made it relatable and human. And Max did this by just living his life.

"It's still amazing, even after we have all those benefits or rights, we still are treated like
second-class citizens," he said in our interview. "We're not taken real seriously -- or if we are, we're superheroes. And we're neither."

On that final point, however, I must beg to differ. Max Starkloff was never a second-class citizen, even when the world insisted on treating him as such. But he was a superhero.

That wasn't because he had a disability -- but because of what he did for people with disabilities.

For more on Max Starkloff's life, and commentary from people who knew him, please see Aimee Levitt's obituary here.