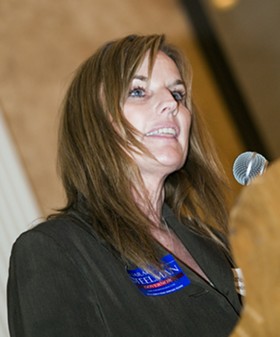 Remember Sarah Steelman? Of course you do! A few years ago, she was Missouri state treasurer and hailed far and wide as the most attractive candidate for Missouri governor. Not that being a potential GILF did her much good: Steelman lost -- by a narrow margin -- to Kenny Hulshof in the 2008 Republican primary.

But now she's back! This morning Steelman officially launched her campaign to unseat Claire McCaskill in 2012 with a spanking new website and Twitter feed that solicit the opinions of ordinary Missourians on such topics as jobs, spending and education.

Daily RFT phoned the Steelman campaign for comment by was told by unofficial spokesman and family friend Jeff Layman that we would have to wait until he had finished eating his lunch.

Steelman's the first Republican to throw her hat into the ring, and Jo Mannies over at the St. Louis Beacon wonders if her early announcement will be the goad to former Senator Jim Talent, who lost to McCaskill in 2006, to start campaigning to get his old seat back.

So far, Steelman has had nothing original to say. "My campaign is about the people of Missouri," she announced in this morning's press release. "It's about making their voices heard in Washington and fighting for their interests. I believe in the principles of limited government, individual responsibility, and sound fiscal policy. If we put power back where it belongs - with the people, not government - then there is nothing that we can't accomplish together."

But it's still very, very early.