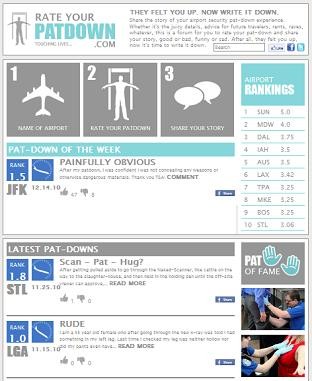 We here at Daily RFT were excited to learn about Saint Louis University graduate student Eric Sucher's new website allowing travelers to rank the security pat-downs they receive at the world's airports.

Given all the rancor about the Transportation Security Administration and its screening procedures, we imagined that people would have plenty to say about how they were violated.

Commenters at rateyourpatdown.com seem to have checked their tongues along with their luggage. The comments on the site are short. Curiously so.

Consider the tale from a website commenter who titled his experience at New York's JFK airport "Tranny Trouble."


I'm a male cross-dresser and have a relatively high pitched voice for a man. They put me in a room with a female TSA agent. She mistook my junk for contraband goods and had me take it out. Shit was so cash when she realized what was going on.

That's it? Based on the comments we've received at Daily RFT when writing about cross-dressers, you'd think the traveler would've been a lot more upset about the callousness of the TSA official demanding to see his "junk."

The same goes for the commenter "Sexually Molested" who describes an experience she (or he) had at the Jacksonville airport:


The TSA (Touch Some Ass) agent sexually violated me. I called the police and charges are being processed.

Again, you'd think someone who pressed charges against the TSA would have a lot more to say about the experience. But then, all the comments at rateyourpatdown.com are similarly laconic. We couldn't find a single one that stretched on for more than 150 words, making them more like Tweets than the juicy rants we were hoping to find.

Others seem downright improbable, like the one titled "Careful of the Herpes."


When my TSA screened asked me if I had any tender spots on my body before my patdown began I told him to be gentle of my open herpes sores. It as a joke but he did the whole exam with a big smile and treated my request seriously. It felt less like the standard grope and more like a gentle caress. Good work buddy!!!

That said, we do appreciate the graphic the website uses to grade security at the airports. The icon shows an airplane pointed up or down (to reflect the quality of the security screening) and looks very similar to the graphic a certain smut magazine uses to review pornographic films. Only in that case, the image is flaccid, semi-erect or fully-erect penis. You know, the kind that TSA officials love to handle.