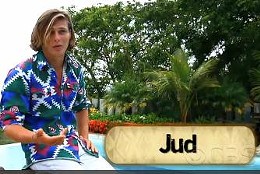 Jud "Fabio" Birza moved to Los Angeles two years ago from Lake Saint Louis. Back in Missouri, Birza was perhaps best known as a competitive swimmer and a model. He graduated from Wentzville Holt High School in 2007.

Birza says he rarely watched Survivor before being cast for the show earlier this year. He then watched previous seasons on DVD and trained by swimming and running on the beach. He even tried to build huts with palm fronds while preparing for the show.

In winning Survivor, Birza will get a check for $1 million. He's planning to enroll in college in L.A.