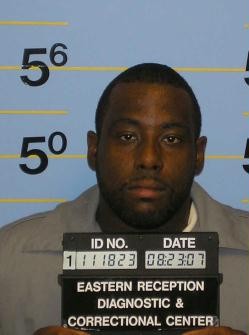 Hefner was shot during an attempted robbery yesterday at 3:45 p.m. at the 7700 block of Olde English in the 63123 zip code, according to a press release from the St. Louis County Police Department. Police believe the two suspects were let into the apartment by other occupants.

Police have identified two men who are wanted for questioning. One, pictured here, is 26-year-old Belvin J. Williams. Williams is five-foot-eight-inches tall and weighs 185 pounds.

The second suspect is described as a black male, six-foot-six-inches tall, physically fit, with a tattoo under his left eye in the shape of a cross also featuring "some type of writing."

People with information are encouraged to call County Police at 889-2341 or Crimestoppers at 866-371-TIPS.

EDITOR'S NOTE: This post was updated at 3:30 p.m. to include a different picture. Police originally provided a photograph of a man they identified as Belvin Williams -- only to retract the picture a few hours later, saying another man used Williams' identity in a 2006 arrest. They say that this new picture really is Williams. If it turns out there's been more funny business and the cops change their minds again, we'll update this post. Stay tuned...