Judging from the mauve and turquoise color scheme, it's been about 25 years since Barnes Jewish Hospital's abdominal transplant unit's old digs on the sixth floor got remodeled. It's entirely probable that 25 years from now, the unit's new space ten floors up will look equally dated, but for now, it's the very first "lean" nursing unit in the Midwest and a model of modern medical efficiency.

The hospital borrowed its "lean" design philosophy from the auto industry, which may bring to mind the image of hospital beds whirring along an assembly line while doctors and nurses poke at them with tweezers. Fortunately, the only thing the hospital borrowed was the notion that it should maximize customer service while minimizing waste. "On the nursing unit," explained a press release, "this should translate in more efficient, safer and improved patient and staff comfort." (Although one of the members of the design team, Laurie Wolf, is an ergonomic expert who once designed dashboards for GM cars. And also military tanks and helicopters.)

The first patients moved into the new unit on Wednesday morning. Wednesday afternoon, Daily RFT paid a visit to the hospital to check out the new leanness and meanness. 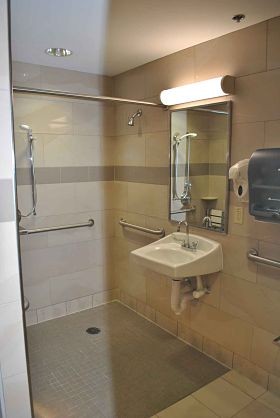 Some of the improvements are so common-sensical, it's amazing nobody thought of them before. The new unit has more beds -- 38 as opposed to 24 -- so all the transplant patients, not just the ones undergoing surgery can stay there. "These patients want to see their surgeons, too," says Alyson Hughes, the floor's nurse manager who was also part of the unit design team.

There's videoconferencing equipment in the conference room. All the rooms are arranged exactly the same so staffers don't have to fumble for meds and rubber gloves and other equipment. The thresholds between the hallways and the rooms and the rooms and the bathrooms have been removed, so it's easier to move carts and beds and wheelchairs. The toilets are mounted on the floor instead of the wall for more stability. (The new toilets are also capable of holding people who weigh more than 300 pounds. In the old unit, it was not uncommon for toilets to fall off the wall.)

The new nurses' station is in the middle of the floor instead of buried near the back. Most importantly, says Hughes, "the dietitian, the social worker, the case coordinator and the pharmacist are all in the central space. The social worker and the case coordinator used to have their offices way in the back and the dietitian wasn't even on the floor. Normally you need six people to make a decision, but when they're all everywhere, you waste a lot of time paging people or waiting for them to call you back. But when you can just turn to the person in the next cube, it takes just five or ten minutes and the decision can be made more collectively.

"It's good for patient safety," Hughes continues, "because there's not a lag in care. It's also a good morale-builder because you can communicate more often."

The designers of the new unit "really took into account the nurses' needs," she adds.

The two biggest time-saving innovations, though, are the new computer system, called Compsas, and the procedure room.

In-house programmers developed Compass, which, as Kathy Holleman, the hospital's senior PR coordinator, points out, is far cheaper than buying from an outside company. It connects the touchscreen monitors beside every bed, the computer terminals in every room and the patient board at the nurses' station. Previously a white board with little stickers (as seen on every TV medical show ever), the patient board is now a giant touchscreen monitor. Whenever someone comes on duty or there's a change in a patient's status, no one has to remember to move a sticker or write in a different name; it all shows up automatically.

A barcode system with patient id bracelets and medicine bottles helps keep track of drugs and dosage. (Every room has a scanner gun.) And instead of having a nurse explain how to take the drugs, patients can watch informational videos on the touchscreens by their beds. (They have compelling titles like "Caring for Your New Transplant.")

Patients can also use the touchscreens to watch TV, connect to the hospital's concierge system ("It's not really lean," Holleman admits, but she thinks it's cool anyway) and see a list of which nurses and technicians are on duty. "You know who your surgeons are," Holleman says, "but the rest can seem like a blur otherwise." 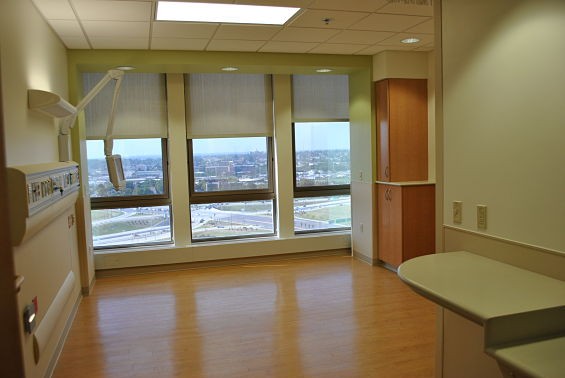 The procedure room, which is right next to the elevator, is a holding area for patients who are waiting for transplant surgery. "We used to admit the patients to a room," Holleman says, "and that would tie up the room. You don't really know if a transplant's a go unless a doctor looks at the organ. We use the procedure room to do bloodwork and prep."

"It's also used for biopsies," Hughes adds. "After a transplant, there's a fear of infection. You take a biopsy of a kidney or a liver to see if it's in rejection." Now that a patient doesn't have to be checked into a room, she says, "we've taken a process that took two days and made it into two hours. It's more satisfying for the patient. One woman just told me, 'I love this room.'"

Five other floors at Barnes will go "lean" in 2011. No one in the hospital's administration is saying how much the renovations cost -- even the employees don't know. "I think they don't want it to get out so people will go, 'Why does transplant get a million-dollar project?'" Hughes says.

"One reason transplant was first was because of we've done a record number of transplants," Holleman says. In 2010, the hospital transplanted 500 organs, 220 of them kidneys.