December 15, 2010 at 10:53 AM
comment
The St. Louis County Council is okay with you smoking at the bars in Harrah's Casino -- just don't even think about tying your dog up outside while you do it. 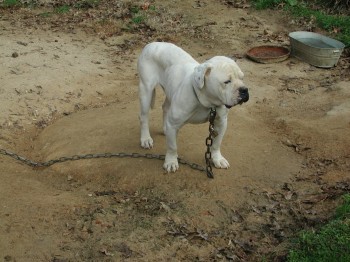 As the Post-Dispatch reports, the council took steps at its meeting last night to exempt the bars at Harrah's from the smoking ban that goes into effect in January. But they also took steps to crack down on people who leave their pets tethered for hours on end.

Previously, county residents could leave their pets on a chain for twelve hours a day; the new bill, proposed by Councilwoman Barbara Fraser, will limit the daily total to nine hours. And while spans of up to ten continuous hours were previously permitted, the new law would limit continuous tether time to eight hours.

Tethering will no longer be permitted in St. Louis County if the temperature outside is colder than 33 degrees or warmer than 89 degrees.

Fraser did not respond to our call seeking comment yesterday; the Humane Society of the United States has this little fact sheet explaining why tethering is cruel to dogs.