Black Sheriff Deputies Once Again Dicked Over by the Man

Here, though, is what doesn't -- in Cardona's words -- "shock the conscience." That's the fact that Cardona is a white, good ol' boy who campaigns for his elected position in an orange hot-rod he calls "Street Justice" but looks -- for all intents and purposes -- like the General Lee in the Dukes of Hazard.

Is it really any wonder, then, that someone like Cardona would step up for St. Louis Sheriff James Murphy -- a man who the jury of ten whites and two blacks recently found to have fostered a racially hostile department? 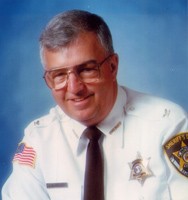 The truth is that the punitive damages of $350,000 to both Hill and Hughes is peanuts compared to what they've endured over the past four years -- ever since their white colleagues hanged a noose near a holding cell full of black prisoners in the basement of the Civil Courts building. All Hill and Hughes wanted was for Murphy to acknowledge the incident and set up procedures to ensure that such insensitive horseplay didn't occur again.

It wasn't like it was the first incident of racism within the department. As brought up during the trial, whites colleagues who referred to their black coworkers as "porch monkeys" and "niggers" had largely gone undisciplined under Murphy's 21 years as sheriff.

When Murphy refused to discipline the people who hanged the noose and ignored Hill and Hughes request for a meeting, they sued. In response, Hill was demoted to the graveyard shift. Hughes, meanwhile, was fired. And, Murphy? He refused to see any wrong.

Right before the jury was to consider punitive damages for the case, Murphy took the stand. Asked whether he was sorry that the noose was hanged in the Civil Courts building, the sheriff avoided the question. Instead he answered that he was sorry that the plaintiffs took offense to the symbol.

Jerry Dobson, Hughes and Hill's attorney, told me after the trial that he thought his clients would receive less in punitive damages until Murphy made that statement.

"I think that really angered the jury," said Dobson.

In attempting to send Murphy a message, the jury upped the ante to $350,000. Is that sum really as "excessive" as Cardona says it is?

But, hey, these were just two lazy employees trying to make a buck off the city, right? They should be happy with what they got. Read Jacques Hughes' story, and just try to make that argument.