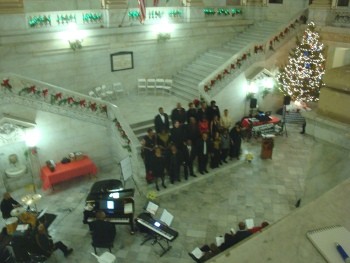 They're big, they're packing heat and they go toe-to-toe with the city's most vicious gang-bangers for a living.

But did you know the St. Louis Metropolitan Police Department also has its own choir? As we reported earlier this year, the singing group is one of only four such police choruses in the country. And last night in City Hall, the crooning cops were out in full holiday flair, swapping their belts and vests for sartorial splendor and showcasing their softer side to the community.

"People are surprised that we have talent other than locking people up and reading their Miranda rights," says John Leggette, a commissioned officer in District 4 who also sings tenor with his church and has performed with the St. Louis Symphony Orchestra.

The choir first got together three months ago for a benefit concert on the anniversary of September 11, at the suggestion of Chief Daniel Isom. The chief knew that Leggette had a good set of pipes, so he challenged him to put a chorus together. After a mass e-mail went out, 25 police officers and civil servants took interest, and the choir began practicing at police headquarters once each week. Leggette says the group intends to hold a community concert every few months.

The sound wasn't all that bad, considering that most of the singers on stage aren't exactly known for their soothing voices while throwing perps into cars. The show included a three-piece band, several gospel numbers and help from the Carr Lane Middle School Show Choir. The warblers, who received a rousing ovation, seemed proud to be recognized for their sensitive sides.

"We'll lock you up, and then put you to sleep," boasted Officer Christopher Rumpsa.

In the spirit of law and order, following is our list of the Top Seven holiday carols sung by St. Louis's finest -- along with our translation of what these battle-scarred cops may have actually been thinking while they sung them.

2. Grandma Got Run Over by a Reindeer, or Another Drunken Hit-and-Run on Manchester

4. Ding Dong Merrily on High, or Sex Game at Wash U. Goes Too Far

5. Rudolph the Red-Nosed Reindeer, or Busting A Coke Party in the Central West End

6. Up on the Housetop, or Chasing a Burglar up the Fire Escape in North City