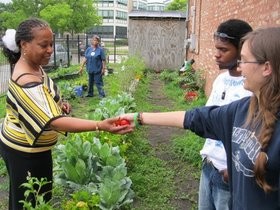 For those of y'all who think Monsanto = Satan: It was they who threw in $100,000 to help fund the City Produce Project up in Chicago, which last year produced 20,000 pounds of corn, squash, carrots, beans and other veggies in Chi-town's so-called "food deserts" (defined by the USDA as areas where low-income folks don't have access to healthy food).

First of all, where's ours?! (Daily RFT knows that St. Louis has spots -- such as the Northside -- that qualify as food deserts).

Secondly, some of you will hate on all this by saying that $100 large is a drop in the silo for Monsanto. It is. And no question it's a good PR move. But we're willing to bet the low-income Chicagoans got more out of a handful of urban truck patches than Monsanto ever did, relatively speaking.