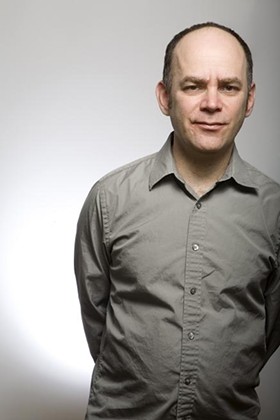 Unlike lots of standups who are frenetic loudmouths, Todd Barry is a soft and gentle sip of vinegar. A card-carrying member of alt-comedy's inner circle, Barry has mastered a delivery that's famously low-key, though his working life is anything but: He's done film, festivals, lots of stuff in animated TV, was briefly the Third Conchord in Flight of the Conchords, and has played sleigh bells for New Pornographers. He'll be at the Firebird on Friday.

Daily RFT: So you recently moved out of your apartment of some 20 years? Why, and how did it go?

Todd Barry: I did move. I should've done it 15 years ago. The apartment was shitty, small, and had mice, but it's just so much easier to just sign a lease than look for an apartment in New York.  The move was a bit of a nightmare because I'm kind of a pack rat/low level hoarder. No dead animals or anything, just lots of accumulated paper (mainly posters of myself).

In "The Wrestler," you were very convincing as a petty-tyrant middle manager who used his authority over Mickey Rourke to make him feel small. Any real-life inspirations?


I think we've all had mean, bully bosses, so it wasn't too hard to imagine what that guy would be like. Also, I'm like that in real life.

Side question: Did you hang out with Mickey Rourke?

We hung out constantly and became fast friends. He's looking over my shoulder as I write this.  But seriously, there wasn't really much time to hang out.  He's also a pretty shy guy, and so am I, so we didn't chat much. But he was nice when we did.

I heard you recently played a vampire in a film (I think with Sigourney Weaver). What was that like?

It's a movie called "Vamps" that was directed by Amy Heckerling, who directed "Clueless" and "Fast Times at Ridgemont High" among others. It's sort of a modern day Vampire comedy. That's probably not the best description. But I got to some pretty heavy makeup for some of it, which I've never dealt with before. And yes, I did a scene with Sigourney Weaver, which was sort of surreal.

Your pal Louis C.K. is physically bigger than you. Have you ever gotten into a fight?

Louis and I usually get in about 20-30 fistfights a year. I win the majority of them.

This sounds like a "joke answer" but I'd love to be a defendant of plaintiff on "Judge Judy." Just to see how mean she'd be, and how I'd react.

Have you ever eaten anything scary?

I tried raw oysters many years ago. I know lots of people find them the "opposite of scary" but not me.

Not to the extent that I want to have any, but if I see a cute one on the street or something, it will make me smile. And I will make a stupid face to try to make it laugh. I never should've admitted that,  because it probably makes me look less "edgy," but it's too late to delete.