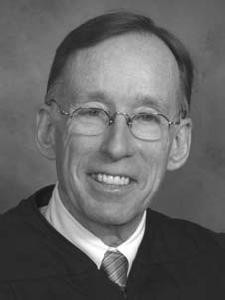 Note: Updated December 13 with new information on two court cases that the archdiocese allowed Mooney to rule on prior to the St. Stanislaus case.

Dear Reverend Burke,
I received your invitation to the Law Day Mass. Because of the Catholic Church's chronic abuse of gays and lesbians, I do not feel welcome in your church. I decline to attend.
Very truly yours,
Lawrence Mooney
Two years later -- in October 2009 -- that private correspondence between judge and archbishop would make its way into a court filing involving a protracted legal battle between the Archdiocese of St. Louis and members of St. Stanislaus Kostka Parish over control of the church's property.

For attorneys representing the archdiocese, the note suggested that Mooney's "impartiality might reasonably be questioned." For the attorneys for St. Stanislaus, the note -- originally filed under seal and reported here for the first time -- demonstrated just how low the archdiocese will stoop to gain control of the traditionally Polish church north of downtown.

For more than a century, St. Stanislaus has enjoyed a special privilege within the archdiocese that allows it to control its own property. In 2004, Archbishop Raymond Burke attempted to change that, arguing that the church needed to hand over its estimated $8 million in assets to a trust overseen by the archdiocese. 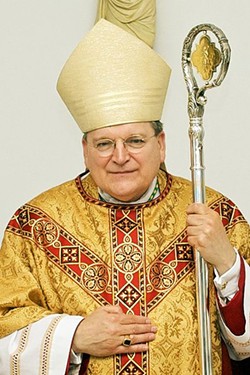 Fearing that the archdiocese would take the money and then close the parish, the congregation balked. Burke responded by removing the church's priest. Members of St. Stanislaus then found a priest of their own -- Marek Bozek, a native of Poland -- who Burke promptly excommunicated upon the pastor's arrival to St. Louis in December 2005.

In July 2008, the archdiocese and several former members of St. Stanislaus, who'd come to side with the archdiocese, sued Bozek and the church board for control of the parish.

During the discovery period of that lawsuit (which is still wending its way through St. Louis Circuit Court with no end in sight), it was revealed that former St. Stanislaus member Roger Krasnicki had shared 17,000 documents and 255 emails with Greensfelder Hemper & Gale, the law firm representing the archdiocese.

From 1977 to 2008 Krasnicki, a lawyer, had served as the parish's de facto attorney advising the church on numerous legal issues. For that reason, St. Stanislaus' attorneys with the Clayton-firm Armstrong Teasdale saw Krasnicki's aid to Greensfelder as a violation of attorney-client privilege.

What's more, they argued, it was a conflict of interest for Greensfelder to then use that information against St. Stanislaus. Based on those arguments, Greensfelder should be disqualified from the case.

According to court records, since sending his note to Archbishop Burke in 2007, Mooney had twice sat in on appeals in which the archdiocese was named as the defendant in cases alleging sexual abuse by priests. In both those instances, Mooney and his colleagues had sided with the archdiocese, agreeing that the sex claims exceeded the statute of limitations.

But in the appeal from St. Stanislaus, the archdiocese's attorneys suddenly argued that Mooney might be biased against them.

Why? Maurice Graham, the attorney representing Greensfelder on behalf of the archdiocese, tells Daily RFT that he can't comment on pending litigation. However, court documents seem to suggest that the archdiocese's attorneys feared that a gay-friendly judge would favor a gay-friendly congregation and pastor in St. Stanislaus and Rev. Marek Bozek.

"St Stanislaus, through its pastor, Marek Bozek ... has taken a public position that is contrary to the teachings of the Roman Catholic Church relating to the participation in the sacraments of the church by persons who are in active homosexual relationships."

Graham then included as an attachment a lengthy letter that Bozek wrote to his parishoners in which, among other things, he expressed his belief that all people be allowed the rights of the sacrament including married priests, women priests, divorced and remarried people and "lesbian, gay, bisexual and transgender members of our family."

Graham also included as an attachment the letter that Mooney sent Burke in response to the archbishop's invitation that the judge attend a special mass for lawyers and magistrates.

Mooney declined to talk to the Riverfront Times about the St. Stanislaus' lawsuit. But his bio with the Court of Appeals doesn't hide his stripes, noting that he's a member of the International Association of Lesbian and Gay Judges and listing the name of his "life partner."

Mooney eventually recused himself from the three-judge panel hearing the appeal. Those judges, meanwhile, agreed in part with the St. Stanislaus' attorneys. In a ruling last February, they told Hettenbach to reconsider his ruling but did not expressly order that he disqualify Greensfelder from the case.

It's hard to tell what impact Judge Mooney's recusal had on the case. Ultimately, the appellate court's decision was circumvented anyway this past September when St. Stanislaus withdrew their motion to disqualify Greensfelder in St. Louis Circuit Court. A month later, the parish took its case across the river to St. Clair County, where it filed a suit accusing Greensfelder of professional misconduct for using information obtained from Krasnicki.

Thomas Keefe, the Belleville attorney who filed the suit in Illinois on behalf of St. Stanislaus, tells Daily RFT that a change in jurisdiction makes sense because Greensfelder has a Belleville office -- and the archdiocese has undo influence in St. Louis.

That said, he'd welcome it if Greensfelder tried to move the case to St. Louis.

"If that happens, we're also going to sue the archdiocese," says Keefe. "Right now, they're out of the picture because they don't have jurisdiction in Illinois."