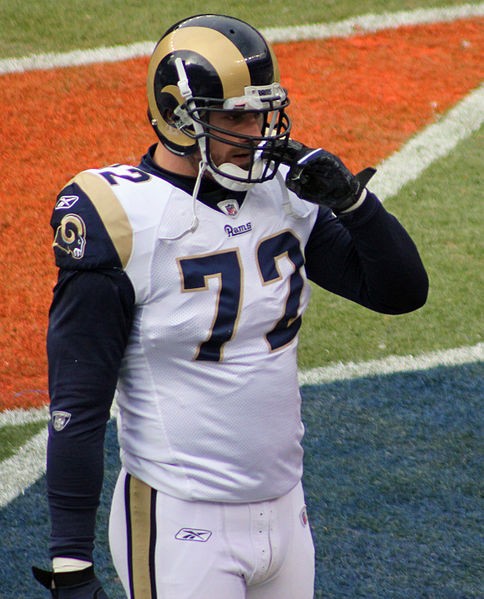 Three down, three to go. So far, we've looked at the Rams' anemic wide receiver corps, inspected their sievelike outside linebacker situation, and taken offense at the offensive line's interior. (And yes, I am feeling irritatingly clever this morning, thank you for asking!) Now we move on to somewhat less pressing needs, with the back half of our draft need countdown.
Today, we're going to look at what has actually been a major strength for the 2010 Rams: the defensive line. Specifically, the defensive tackle position, where Fred Robbins and C.J. Ah You have been the Rams' strongest players this season, and have done their level best to make us all forget the bad old days when the Rams had absolutely no pass rush whatsoever.
The Rams' track record in drafting on the line in recent years has not been very good, to be honest. Sure, there have been a couple Chris Longs here and there (most notably Chris Long), but there have been far more Adam Carrickers and Jimmy Kennedys.
With that foul taste in the back of our collective throat, let's take a look at the Rams' current (much better) situation in the trenches.
Why in the word would defensive line be a need? I can almost hear you asking the question. After all, week after week, I write about how well the Rams' D-line has played, so why would I list it as a need for the draft in just five-ish months?
Well, I'll tell you why. Because James Hall is a beast, but he's going to be 34 years old. Because Fred Robbins is a veteran brought in for depth, and isn't getting any younger. Sure, Chris Long is young and has played lights-out for much of the season, but the rest of the line needs an injection of youth.
Defensive tackle is more of a concern than defensive end, but Long is really the only guy on the line who should be considered a lock. Personally, I'm a big fan of George Selvie, and think with time he could turn into an elite pass-rusher, but he's not there yet, and there are no guarantees he'll continue to develop. If the Rams have a shot at an elite end, Selvie definitely shouldn't be cause to pass.
D-line may be the most loaded position in this draft, so there's a fairly good chance the Rams can find a guy to help them out. Robert Quinn was suspended from North Carolina following an NCAA investigation into improper help being provided to three UNC football players, mostly having to do with tutoring and paper ghostwriting. (I usually take the side of the NCAA in these cases, as I think it's a problem for these athletes to be selling their services to agents and the like while still in college, but this particular case seems too flimsy for my taste. Just my two cents.) Not playing the 2010 season could knock Quinn down on draft boards, but if not for that, he would likely have been a lock to go in the first five or so picks. As it is, it's possible he could be available when the Rams pick, and they would be foolish not to pounce on the chance to add him to their defense. Quinn is a ridiculously explosive pass-rusher, and with him playing opposite Chris Long, the Rams' D-line would be a terrifying force.
Da'Quan Bowers of Clemson is moving up draft boards in a hurry thanks to one of the most dominant seasons in recent memory in 2010. He was a fair but not outstanding player his first two seasons playing for the Tigers, but just erupted this season and played almost unblockable most of the time. He'll probably be gone by the time the Rams pick, unfortunately.
Marcell Dareus out of Alabama is the top tackle in the draft, and he's a good one, but it's likely he'll go a little too early for the Rams. Jared Crick of Nebraska has great size and strength, but his athleticism is lacking and he's limited in space. He may fit better in a 3-4 as well. Speaking of 3-4 players, Jerrell Powe of Ole Miss has played mostly nose tackle in his college career, but I think he could turn into a very good 4-3 tackle. He's had some academic issues in the past and would play his rookie season at 24 years old, but he has tremendous physical tools. An intriguing later-round option in my opinion would be Phil Taylor from Baylor. He's ridiculously huge, but still maintains decent athleticism. He would be very much a run-stopper in the middle of the field, though, rather than a pass-rushing type of tackle. He reminds me a little of current Ram Darrell Scott, but I think Taylor could be better in the long run. Plus, just 'Phil Taylor from Baylor' out loud about three or four times. Just makes you feel like laughing, doesn't it?
Of all the positions on this big-ass list, defensive tackle may be the one least fillable through free agency next season, making it that much more important to draft some talent at the position. There are plenty of depth guys on the market, but not much in the way of real impact players available. (Among the players I can actually see making it to free agency, that is.) If I had my druthers, D-tackle just might be the direction the Rams go in the first round next year. Unless, that is, you think Albert Haynesworth would be a good pick up.