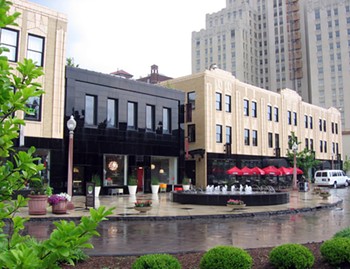 But in January, the McGintys will be closing their doors for good. Laura McGinty tells Daily RFT that they have no plans to open another shop in St. Louis.

"We had fun in the city while it lasted, but now it's time to head home," she says.

Frances Thompson, vice president of marketing for Koplar Properties, which leases the Maryland Plaza, says the landlords are in negotiations with a new tenant, but declined to give specifics, citing a need for confidentiality at this point.


McGinty's closure is just the latest in a number for the Central West End this season. In the last month or so, the Pasta House Company suddenly shuttered its doors, as did Gelato Di Riso. Something Special by Lillian, the longstanding women's apparel shop, is in the process of closing, as is West End Gallery, one of the larger (and prettier) antique shops on McPherson.

But neither McGinty nor Thompson blames the jewelry shop's closure on an overall neighborhood malaise. McGinty says that she and her husband recently became grandparents and want to spend more time in Cape Girardeau with their four-month-old grandson: "This is an exciting time in our lives -- and what's so important to us is our family and our home."

And Thompson says the overall retail picture in the Central West End is good. "Given the tough economy we have faced in the last couple of years, I think it's remarkable that the CWE, which boasts a high concentration of restaurants in a small area, has only seen a couple of store/restaurant closings," she tells Daily RFT. "In fact, even in this terrible economic climate, Maryland Plaza has had three tenants within the last year expand their space" -- Bissinger's (a high-end chocolatier/bar), the Cup (a cupcake/coffee shop), and Moris Fashions, which boasts designer clothes.

"A certain number of closings are to be expected in both a good and a bad economy," she adds.

McGinty Jewelers on the Plaza has yet to commit to a closing date, although Laura McGinty says it'll be "sometime in January." In the mean time, the shop is open -- and boasting a going-out-of-business sale, just in time for Christmas gifting.

Don't expect to see only picked-over merchandise from last year, either.

"We have new inventory arriving -- inventory we ordered before the decision was made to close," she says. "We definitely have some great sales going on."