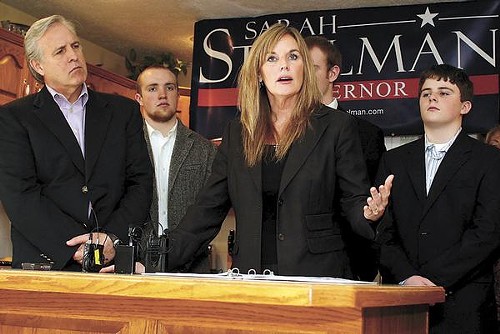 On Twitter, Reardon called the interview a "disaster." And, as politico.com reports, on air, the host huffed that, although Steelman is hot, she "isn't exactly the sharpest knife in the drawer."

Which got us wondering: Just how hot is Sarah Steelman? Is she Sarah Palin hot? Nikki Haley hot? Or -- be still our hearts! -- Kirsten Gillibrand hot?

For the record, we don't believe women should be judged on the basis of their looks, or lack thereof. Nor do we think that, just because she's hot, she's automatically stupid. Steelman holds a master's degree in economics; she also served as state treasurer, which is way beyond the abilities of this Daily RFT correspondent.

But, based on Reardon's response to their brief chat, Steelman's looks are clearly gonna be an issue. (Call it the curse of the hot chick: Like Rodney Dangerfield, they can't get no respect.)

So, readers: What do you think?

Is Sarah Steelman too hot for politics -- or do we only think she's hot because she's a relatively attractive woman in a profession that, until recent years, had few of them?

Are Sarah Steelman's good looks causing her to be unfairly labeled as dim -- or are her looks a big part of what's gotten her this far?

And (not to get all Seinfeldian, but ...) what is up with all these really attractive people running for office? The GOP delegation is starting to look a bit like the lineup at the Country Music Awards: half aging white dudes -- and half ridiculously attractive women.

Yeah, it's good for Fox News. But can this possibly be good for democracy?