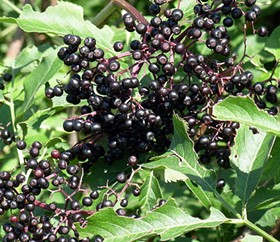 Just as Brazilian açaí once rose to prominence as a faddish "superfruit," the elderberry may be The Next Big Thing in health food circles, and Missouri farmers are hoping to cash in: the biggest elderberry farm in the whole country sits in Hartsburg, and the USDA just awarded a combined $60,000 to two different elderberry enhancement programs in the state.

But farmers & dealers may want to watch how they market their crop: a St. Louis couple just filed a class-action lawsuit in federal court against a Kansas-based elderberry juice maker for consumer fraud, asking for $10 million in damages.

Last October, Matthew and Elizabeth Delling, who live in St. Louis County bought a $40 bottle of Wyldewood Cellars elderberry juice from The Healthy Shopper  in Concord (S. Lindbergh and Baptist Church Road). The packaging mentions all kinds of ailments the juice supposedly treats. It even mentions an Israeli oncology lab that gives it to AIDS and cancer patients.

But the Dellings say they "failed to realize any health benefits and certainly did not see an abatement in their allergy or arthritis problems."

Interestingly, the complaint alleges that the FDA even sent Wyldewood a letter back in 2006, stating that the company was marketing their juice as a drug, but it hadn't been approved as such.

Read the details of that letter and the full complaint here.

Bidness See You in Court!